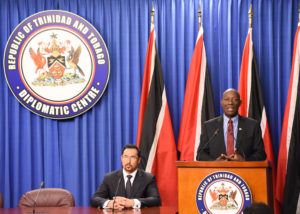 Prime Minster Rowley discussed Government’s legislative agenda and indicated that many items are being brought to Parliament such as the Insurance Bill, Preliminary Enquiry Abolition Bill, the Tobago Land Adjudication Bill and others. As a result, there will be an increased number of sittings to debate these bills over the next two months.

The Prime Minster acknowledged the 2015-2016 fall in revenue, his government’s inheritance of a mismanaged economy from the previous administration and the present inability to maintain past expenditure levels. He indicated that hard and unpopular changes are necessary to avoid a collapse of the economy. Steps are also being taken to create jobs and ensure our survival during the economic downturn.

Prime Minster Rowley named tourism as a critical area in our quest for economic diversification. He named Tobago as a good pathway to focus the expansion of economic activity in this area. He also indicated that his government would be taking a focused and strategic approach to spending in tourism. He cited the Sandals project being undertaken in Tobago as part of this focused approach and noted that efforts were being made to attract another major international hotel brand to Tobago.

Prime Minster Rowley also discussed steps taken to deal with the issue of gas shortages which is leading to the closure of plants in Point Lisas. He informed the media that Minster Young had been engaged in significant travel to Venezuela and had recently concluded the signing of a project agreement between NGC, Shell and PDVSA (Petróleos de Venezuela S.A.) helping secure the future of oil and gas in Trinidad & Tobago. As a result, the government expects a gas sales agreement by July 2017.

Government is also strengthening existing relationships with BP, a consistent partner. The Prime Minster noted that the Juniper Gas Platform project would be coming onshore soon and that the Angeline project was also being negotiated with an agreement carded for later this month. He stated that industrial relations challenges in the energy sector have the potential to compromise delicate investment possibilities. He noted that Trinidad and Tobago was competing against the gulf coast shipyards for business and we must rise to the challenge to enable us to remain competitive in these tough economic times.

The Prime Minister also indicated that he will be travelling to Houston, Texas on 29th March 2017 to engage in various meetings with Shell and BP who are already in Trinidad & Tobago and also Exxon with regards to the ramping up of our energy negotiations with Guyana.

When his trip to Houston is concluded, the Prime Minster will proceed on a one-week vacation.

In the last week of May, the Prime Minster will be attending his daughter’s graduation in New York and then will travel to Chile with a small delegation at the invitation of its President. At this visit, discussions will be held as part of our search for new gas markets and building further economic relationships with our southern neighbours. 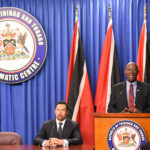