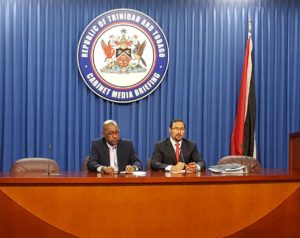 The Water and Sewerage Authority (WASA) is currently refurbishing its wells but citizens of Trinidad and Tobago are being called upon to conserve water to allow WASA to meet the nation’s demand for water.

Speaking at today’s Post-Cabinet Media Briefing Senator the Honourable Robert Le Hunte, Minister of Public Utilities said the refurbishment process is well advanced with 45 wells having already been completed. This has assisted in rectifying most of the water shortages in Penal and Central areas.
Describing the country’s water situation as critical because of a region-wide drought, as has been indicated by the Caribbean Institute of Meteorology and Hydrology, he said the water supply is being closely managed by himself and WASA, even as water production increases.

The Minister said two weeks ago the Caroni Water Treatment Plant was down to 50 million gallons of water but is now back up to 60-62 million gallons. However, aged infrastructure is presenting a challenge for WASA’s storage capacity. Minister Le Hunte said the dams are currently on average 20-30 per cent below where they are supposed to be with the hardest hit being the Navet Dam, which is at 31 per cent. The national average around this time is around 54 per cent.

The aged infrastructure has also resulted in a high number of new leaks per day. However, he said the initial number of reported leaks have been reduced from 600 to between 120 to 125 in South Trinidad and from 2200 to 1200 in North Trinidad. At present, 88 million gallons of water a day is distributed in the South and around 89 hundred gallons a day in the North.

Cabinet has appointed former Caribbean Court of Justice Judge, Justice Rolston Nelson to investigate the contract between the Trinidad and Tobago Airports Authority and Novo Technology Incorporation Limited for the installation of an automated border control system at Piarco and the ANR Robinson International Airports.

The Hon Stuart Young Minister of National Security, Communications and the Minister in the Office of the Prime Minister made the announcement at today’s Post-Cabinet Media Briefing.
Minister Young said last month Cabinet took a decision to appoint a sub-cabinet committee to look at the documentation around the contract. Red flags were raised when it was discovered that there were two versions of the contract between the Airports Authority and Novo Technology Incorporated Limited.

He said the initial contract, which was approved in December 2017 and then later supplemented in March 2018, was not sent to Cabinet for approval. Both versions of the contract did not follow the usual tender process and were found to be extremely onerous and put the taxpayers of this country at a disadvantage. Justice Nelson’s findings are expected in two months.

Minister Young also assured that the Port at Cedros is fully functional with the Coast Guard strictly enforcing border control to reduce illegal entries from Venezuela into this country. He said they are doing all that they can; both in the water and on the land to ensure that all persons coming into Trinidad are doing so legally.

Minister Young said a decision was taken a long time ago that the maritime borders needed to be secured and so instructions have been given to the Coast Guard to bolster security. He said they are utilizing as many resources as they have to ensure the maritime borders are properly manned and secured. 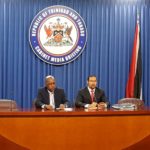