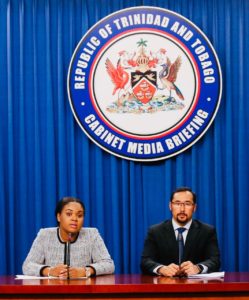 The Special Olympics athlete who remained in Abu Dhabi did so due to illness.

Speaking at today’s post-cabinet media briefing the Hon. Shamfa Cudjoe, Minister of Sport and Youth Affairs said Shanice Baptiste had an asthma attack while in Abu Dhabi and was hospitalised. The athlete has since been released from hospital and arrangements have been made for her to return home on April 1st. The Abu Dhabi Special Olympics committee will bear the full cost of her expenses through insurance coverage. The Minister said she has been in contact with the athlete’s family since learning of the situation and they have been informed of the arrangements that have been made for the athlete’s return home.

The Hon. Stuart Young Minister of National Security, Communications and Minister in the Office of the Prime Minister announced Cabinet’s approval, acquisition and installation of an updated alarm system at the Maximum Security Prison. Minister Young said Cabinet has also

approved an additional 10 prison psychologists, their support staff, as well as a senior and junior pharmacist towards the prison’s rehabilitation programme. 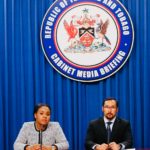