Prime Minister, Dr the Honourable Keith Rowley met with a high-level delegation from the Bolivarian Republic of Venezuela today (Wednesday 24 January, 2018) as negotiations regarding the supply of natural gas to Trinidad and Tobago continues to progress.

President of the National Constituent Assembly, Her Excellency Delcy Rodriguez led the contingent from Venezuela which included Minister of the People’s Power for Oil/ President of PDVSA, the Honourable Manuel Quevedo, Vice-Minister for the Caribbean-Ministry of the People’s Power for Foreign Affairs, Mr. Raul Licausi and Ambassador of the Bolivarian Republic of Venezuela to the Republic of Trinidad and Tobago, Her Excellency Coromoto Godoy.

Discussions at the meeting were fruitful and both parties are very close to signing a final agreement. 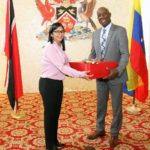