A brief look at the numbers confirms what we already know.

With an estimated 142,000 cases coming before the Magistrates’ Courts annually, the system is stretched beyond capacity. The court is staffed by a mere 50 magistrates who, some will argue, are unrealistically tasked by the current system.

The Magistracy presides over summary offences, less serious than indictable offences as they are punishable by shorter prison sentences and fines. These cases do not require a jury and it falls to the magistrate to conduct the trial, determine guilt or innocence and prescribe a sentence.

Additionally, the Magistrates’ Courts facilitates Preliminary Enquiries into serious criminal matters (indictable offences), to determine whether there is enough evidence for a case to be sent to trial in the High Court.

It is this aspect of the Magistracy’s function that is the subject of The Indictable Offences (Pre-Trial Procedure) Bill, 2017, introduced to Parliament by Attorney General Faris Al-Rawi in February.

The bill seeks to abolish the preliminary enquiry system, which the Government has identified as one of the factors affecting the criminal justice system.

As it stands, thousands of criminal cases are stuck in the Magistrates’ Courts, some languishing there for more than ten years in the Preliminary Enquiry phase, which is merely supposed to determine if there is sufficient evidence to make out a prima facie case.

Some citizens have been waiting for more than a decade to learn whether their cases will be discharged or sent to the High Court for trial.

The situation is further exacerbated when an accused person is unable to secure bail or is charged with a non-bailable offence.  Not only is the State burdened with the costs of incarceration, but the person is denied their freedom in the absence of a determination of guilt or innocence, whilst going through a lengthy preliminary enquiry.

In the new bill, the Director of Public Prosecutions (DPP) will be allowed to determine whether there is sufficient evidence to proceed with a trial. The DPP’s office will receive additional staffing in anticipation of this change.

The Government of Trinidad and Tobago is committed to ensuring that the legal system protects the rights of all citizens.  This bill is just one of several pieces of legislation that will bring sweeping changes to the way our courts function and dispense justice. 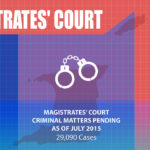