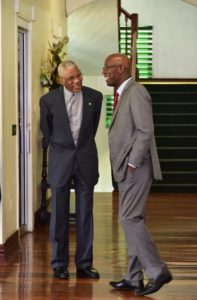 President of the Guyana Oil and Gas Energy Chamber (GOGEC), Manniram Prashad, has welcomed with open arms, the recently signed Memorandum of Understanding (MoU) on Energy between Guyana and Trinidad and Tobago.

In fact, the Energy Chamber President believes that Guyanese, and the Government by extension, should be taking the opportunity to make use of Trinidad and Tobago’s 100 years of oil and gas experience and expertise.

In a missive to the media, Prashad said, “Trinidad has tremendous experience and expertise in the oil and gas industry and we should make use of that. The MoU sets out the framework for co-operation and collaboration between the two countries to work with each other…

He added, “Guyana has benefited significantly from debt write offs from Trinidad and their favourable petroleum dealings. In fact, when our country was in a bad state, many Guyanese went to Trinidad in search for a better life and were accommodated by Trinidadian families. We must not forget that…”

But even as Guyana pursues a symbiotic relationship with Trinidad in the oil sector, Prashad said that there needs to be greater focus on agriculture and trade related issues which over the years, have worked against Guyanese exporters.

He insisted that Guyana must confront these issues with Trinidad. Once this is done, Prashad said that he would urge all private sector bodies in Guyana to partner with GOGEC and explore joint ventures with the Trinidadian Private Sector.

After several rounds of “intense” discussions, President David Granger and Prime Minister of Trinidad and Tobago, Dr. Keith Rowley, signed the MoU on Energy on Wednesday morning at State House.

President Granger promised that the MoU is not a “sell out” of the sector to Trinidad and Tobago. He insisted that there is nothing for the private sector to worry about; that the agreement will allow both countries to benefit from the wealth to come.

Granger said, “The MoU is largely concerned with energy but there are other areas of interest. We extended our conversation in the area of agriculture, sport, and security, and we expect as a result of this engagement today, relations between the two Republics will become stronger.”

The Head of State added, “There is much to be learnt from Trinidad and Tobago in terms of exports, standard of living, education, and the petroleum sector. By collaborating, we will be able to combine our natural resources with their entrepreneurial expertise and it will turn out to be a win-win situation. This is a significant step in making both parties stronger. We will be able to benefit from the experiences of Trinidad.”

Prime Minister, Dr. Rowley said that he was honoured to have inked such an important agreement with Guyana but did not hesitate to express his disappointment with the controversy that it sparked.

The politician said, “To those who are mindful of a TT takeover of Guyana’s good fortunes, to me, that is disappointing because we are working for all people of CARICOM to do better. So to come up against that, it is disappointing. This is simply the participation of a good neighbour with those who have a need for our finance, our skills, our experience. It is my expectation that investment from Guyana too would be welcomed in Trinidad and Tobago.”

Dr. Rowley also sought to remind that when Guyana found itself in the grip of a serious economic crisis in 1981, it was Trinidad and Tobago that loaned it $98M. By 1996, that debt climbed to $536M and Trinidad was at the end of its oil boom.
The Twin Island Republic desperately needed to be repaid but Guyana was still cash strapped. Rowley reminded this morning that the TT government took the decision to write off the debt.

He said, “But we are not holding that as any quid pro quo (a favour for a favour) now. We treated that as circumstantial and we maintain that we are willing to cooperate with Guyana. We hope to continue to travel this road together.”