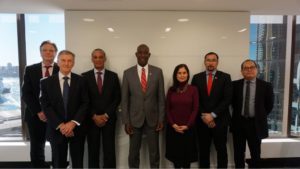 As Prime Minister of Trinidad and Tobago Dr the Honourable Keith Rowley continued his working visit to Australia, he and his delegation attended a number of meetings in Sydney today (Tuesday 22nd May, 2018).

In the first instance, Prime Minister Rowley led his team in a meeting with Australian Export Finance (EFIC) at their headquarters in Sydney. EFIC is Australia’s export credit agency whose loans are backed by the Australian Government and geared towards assisting Australian exporters.

Minister Stuart Young also attended a meeting with the New South Wales (NSW) Department of Justice and the NSW Police Force where the discussions focused on national security issues.

Additionally, Prime Minister Rowley met with representatives of the NSW Government, at the Department of Premier and Cabinet in Sydney. The roundtable meeting focused on counter terrorism and countering violent extremism and the NSW whole of government approach and cross-agency cooperation in dealing with this issue.

The delegation will travel to Tasmania tomorrow (Wednesday 23rd May, 2018) where they will meet with marine vessel manufacturers  INCAT. 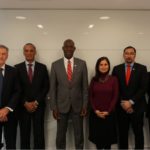