Statement by Prime Minister Rowley on his Meetings with Energy Companies 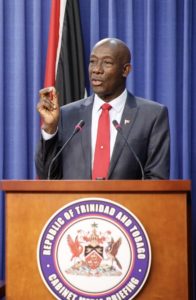 Prior to assuming office in September 2015, there were warning signs that all was not well in the energy sector. Downstream PetChem plants had been complaining about curtailments in gas supply since 2011.

The Government at the time, did not provide us, the public, with the truth as to what was taking place in our country’s energy sector. The then Minister of Energy continuously stated that the gas curtailments were due to routine maintenance.

One of the first tasks of the Standing Committee on Energy was to study the Poten & Partners Gas Master Plan which had been commissioned by the former administration. The former administration did not inform the public of the content and findings of the Poten & Partners report before demitting office. The picture that this report painted was not a comforting one. It spoke about the declining gas reserves, and emphasised the loss of value to Trinidad and Tobago from LNG sales over the years as compared to the revenue that other gas producing nations were receiving.

It also quickly became apparent that the sector was in crisis. The former administration had not negotiated any future upstream gas supply contracts, which meant that NGC had no future gas supply beyond 2018 and worse yet, NGC was facing billions of dollars in claims for curtailment of gas supply from 2011. There had also been a failure by NGC to negotiate gas supply contracts with PetChem entities at Pt Lisas and in some instances NGC was supplying gas on a month-to-month basis with claims mounting against it.

The former Cabinet had also changed the country’s gas supply policy and implemented a greenfield policy which they did not tell the population about, far less, those in the PetChem industry at Pt Lisas, who formed our domestic gas consumer market. What this policy meant is that in a situation of limited gas, NGC would supply gas on an availability basis to the newer plants and the older plants would receive less or no gas. This policy exposed NGC to further billions of dollars in claims as they would be in breach of their gas sales agreements with a number of long-standing customers in the downstream market. We took a decision to reverse this policy thereby saving NGC from billions of dollars in claims.

NGC under a new board and management, assisted by members of the government immediately set about negotiating new upstream gas supply agreements and attempted to settle outstanding claims, whilst dealing with substantial curtailment issues.

Under my leadership we met with the international executives of BP and Shell in London in late 2015 to ascertain their future plans for gas production and exploration in Trinidad and Tobago. This was a conscious decision to indicate to the leadership in these two major International Oil Companies that the Government’s leadership would be taking an active role in the energy industry and placing emphasis on the importance of our relationships in the energy sector.

After months of negotiations, to establish future gas supply and future gas prices, NGC was stuck in its negotiations with BP and EOG, two of the largest suppliers of upstream gas. The parties could not agree the future price of gas beyond 2018 and this meant that NGC had no supply of gas beyond 2018 which would have been a disaster for Trinidad and Tobago. It also meant that these upstream gas producers were uncertain about future investment in exploration and production of gas in Trinidad and Tobago.

In March 2017, I went to Houston to meet the leadership of BP, EOG and Shell. This trip and those meetings were critical in ensuring the future of our energy industry beyond 2018. Minister Young accompanied me on that trip. By my presence and with the authority of the Cabinet of Trinidad and Tobago, that is, the highest level of governmental representation, we were able to unstick the negotiations between NGC and BP and EOG and have both BP and EOG agree to new gas prices and new gas supply contracts with NGC for 2018 and beyond. Had the government not intervened and assisted NGC there may not have been any future supply of gas beyond 2018. These gas prices were higher than what had been negotiated decades ago and were reflective of the state of the gas sector in modern times. Meetings with Shell’s leadership in Houston were also fruitful as their top leadership provided details of their plans for future exploration and production in Trinidad and Tobago.

The Standing Committee on Energy studied the Poten Gas Master Plan and received presentations from them and others on the state of the gas sector in Trinidad and Tobago and in particular the need for us to try and get better value, via increased revenue from LNG. We looked critically to see how we could improve earnings from the energy sector and found that there was perceived value seepage in the LNG contracts. This was the result of changed market conditions from when the contracts were first established. The contracts at Atlantic LNG were negotiated decades before and the terms were not as favourable to Trinidad and Tobago as they could now be. The government decided that it needed to engage the other shareholders of Atlantic LNG, mainly BP and Shell and attempt to obtain better revenues for Trinidad and Tobago.

In March 2018, the Government held a conference entitled, the Spotlight on Energy and began a difficult but important national and international public conversation where we indicated our intention to engage the shareholders of Atlantic LNG as there was a need for the parties to discuss better terms and conditions and improved revenue for Trinidad and Tobago from LNG sales.

In April 2018 I led a delegation that met with the leadership of BP and Shell in London. At these meetings we discussed the future of LNG and stated that it was the Government’s desire to obtain increased and improved revenue for Trinidad and Tobago from LNG. It was agreed that the three parties would appoint “Empowered Negotiation Teams” to explore the possibilities of improvements to the country’s revenues and the future of LNG.

We retained Poten & Partners, an international law firm, White & Case and local legal counsel, Mr Richard Beckles to provide expert advice to our empowered negotiation team which was led by:

The life of Atlantic LNG Train 1 was set to expire in April 2019 and the shareholders had to agree
(1) Whether to continue the life of Train 1 beyond April 2019; and
(2) On what terms would it be operated.

The country’s Empowered Negotiation Team engaged in negotiations with BP and Shell with respect to:

(a) Issues unique to BP and Shell, for example, extensions of Exploration and Production Licences and Production Sharing Contracts, legacy items/claims between the respective parties and the Government/NGC;
(b) The future of Train 1; and
(c) The future applicable pricing of LNG starting with Train 1 pricing beyond April 2019.

After months of negotiations, which proved challenging at times, in December 2018/January 2019 the teams, i.e. BP, Shell, CIC and the Government agreed a new pricing formula for LNG pricing for Train 1. The new formula is indice based and provides for the use of independent international price indices to be used in the calculation of a LNG price which results in significantly better revenue to Trinidad and Tobago.

Additionally, for the first time, as part of the agreement with respect to Train 1, NGC secured LNG cargos that it could sell, itself, on the international LNG market, which results in additional revenue for Trinidad and Tobago.

As a result of the first phase of the negotiations concluded with BP in December 2018 (the phase one negotiations), the Government and NGC received payments of money from BP settling a number of legacy matters and BP sanctioned their Cassia project based on an agreed extension of their E&P licence for the South East. The Government and BP signed an agreement in December 2018 which led to BP sanctioning continued investments in Trinidad and Tobago and capturing BP’s agreement to the new pricing formula for LNG from Train 1. BP also agreed to continue negotiations with the Government and other Atlantic LNG shareholders with respect to the future of LNG.

The Government and Shell continued the phase one negotiations and in May 2019 the parties reached agreement on a number of items, including the settlement of outstanding legacy claims between the parties, extensions of various PSCs and an agreement on an enhanced revenue for the government based on an equitable share of revenue between both parties, with an increased Government take.

The Government’s Empowered Negotiation team over one year has successfully negotiated a complex deal with two major energy players, BP and Shell. The parties went into the negotiations with something of value and found a way forward that gives us all the equitable returns that we are entitled to.

At the meetings held with Shell in The Hague and BP in London, the parties renewed their commitment to the continuation of negotiations between the empowered negotiation teams to move now to phase two of the negotiations which will be focused on the future of Atlantic LNG and the restructuring of same. 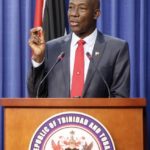 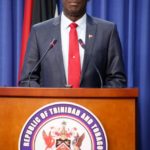