Statement by Prime Minister Dr the Honourable Keith Rowley in the House of Representatives on Thursday 01 July, 2020 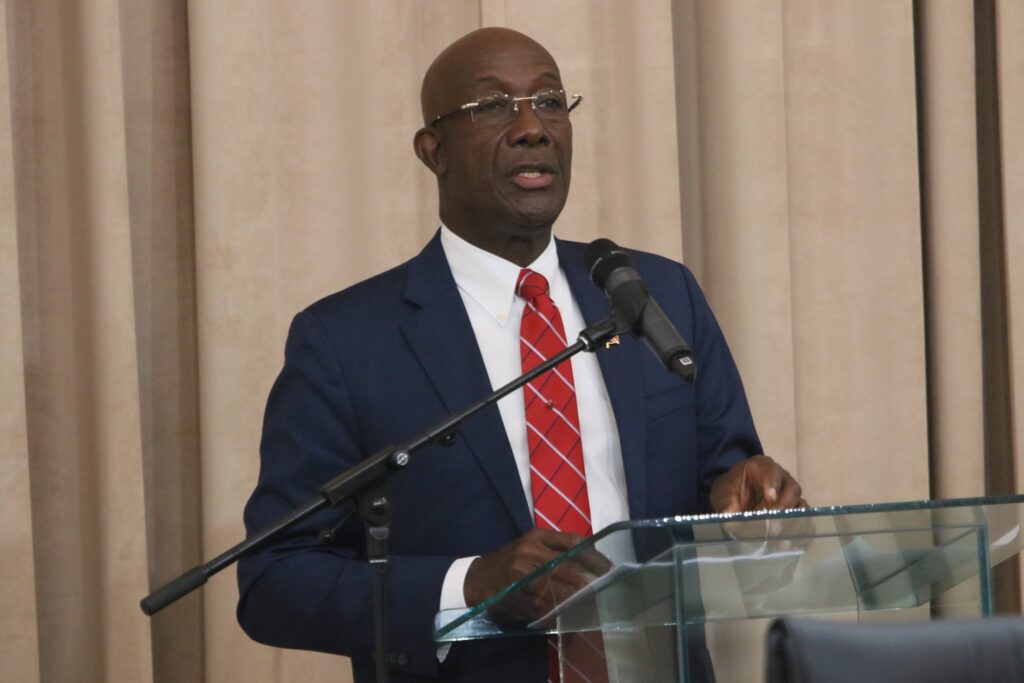 Madam Speaker, it is my pleasure today to lay on the table the Report of the Roadmap to Recovery for Trinidad and Tobago, Phase 1.

Madam Speaker, the world is facing an unprecedented humanitarian crisis that is unleashing dramatic economic and societal disruptions.  To date, there have been over 10 million confirmed infections and over 500,000 deaths due to the spread of the disease. In this crisis, no country has been spared the effects.  In the United States, for example, real GDP growth is projected to be negative 6.4% for 2020 and already more than thirty million persons have lost their jobs. This is expected to be exacerbated by the resurgence in the number of confirmed cases following the relatively swift re-opening of the economy and activity in many States. Similar trends are occurring in other developed and emerging markets throughout the globe.

Trinidad and Tobago has also been impacted, not only by the adverse health and economic effects of the COVID-19 virus, but also by the collapse in energy prices and the associated ‘lower for longer cycle’. Travel restrictions, physical distancing and other isolation measures used to control contagion throughout the globe have exacerbated the depth and duration of this lower for longer cycle, causing bankruptcies, retrenchments and corporate insolvencies, big and small, in many countries.

Even before the first Trinidad and Tobago case was diagnosed locally on 12th March 2020, our local health officials, led by the Minister of Health and the Chief Medical Officer, recognized the potential risk the disease posed to Trinidad and Tobago and began immediately liaising with representatives from the World Health Organization (WHO), the Pan American Health Organization (PAHO) and the Caribbean Public Health Agency (CARPHA) to devise a plan of attack. Working alongside a team which I put together and which included the Minister of National Security and the Attorney General, we devised a deliberate approach to contain the spread of the virus and protect Trinidad and Tobago from the devastating effects suffered elsewhere. The measures put in place early in this fight included:

The creation of a parallel health system,

These measures were meant to preserve lives, as our first priority has always been and remains the protection of the lives of our citizens. Despite numerous calls from several quarters for us to reverse those decisions to temper the impact of the measures on the livelihoods of our citizens and businesses, we steadfastly maintained our position that protection of lives supersedes preservation of livelihoods – always.

The prudence of the Government’s position on that issue is borne out by the relative success we have achieved to date in our fight against this deadly virus. While we continue to pray for the families of the eight persons who succumbed to the disease, we applaud the efforts of our hard working team in containing the spread and its impact on our country. The success of our efforts was internationally recognized and applauded by the University of Oxford COVID-19 Government Response Tracker which ranked Trinidad and Tobago first in the world in terms of its management of the pandemic and its ability to exit the lockdown without undue risk to the population and economy.

We recognized very early on that this fight would have to be tackled not only on the health, but also on the economic front, as the virus itself, along with the measures taken to control it, had and continues to have a deleterious impact on the World economy, with a direct and roll on impact on the Trinidad and Tobago economy. Coming on the heels of a 40% decline in natural gas prices since September, 2019 and a collapse of oil prices, which saw WTI prices going into figures below one dollar per barrel, in March, for the first time ever, Covid threatened the very foundation of our economy.

We recognized that the measures we were forced to put in place to stem the spread of the virus threatened jobs, income, businesses and livelihoods across the length and breadth of the country. It also threatened to reverse the strides GoRTT had made over the course of this term to stabilise and turnaround the economy. Once again, Madam Speaker, the Government very deliberately and methodically set about putting measures in place to protect the most vulnerable, to preserve jobs, to as early as possible revitalize the economy and keep aggregate demand at an acceptable level.

However, recognizing that this was not a Government problem, but a Trinidad and Tobago problem and that the best result could only emerge from the commitment of the entire country to identifying and implementing a solution, I assembled a team of esteemed and willing persons from the public sector, private sector, labour, civil society and academia to create a Roadmap to Recovery. This was done in the clear indisputable understanding that no matter how battered we are left, after the pandemic is over, when it’s all said and done, we would have to take up what’s left of our bed and start walking, even if only with an unsteady gait.

This eminent, multi-disciplinary team immediately accepted the challenge, co-opted other persons with the knowledge and expertise needed to undertake this colossal and critical task and went to work from the date of its appointment on April 16, 2020, donating the time and considerable expertise of its members to this exercise. The committee’s mandate was twofold to be tackled in two phases as follows: –

In the first Phase the Committee was asked to address the issue of “Surviving the Crisis”, to articulate measures to be implemented immediately to protect the vulnerable and ensure the health and wellbeing of the population; and to propose initiatives to “reignite economic activity and ensure social stability”.

The Second Phase of the Committee’s work, currently in progress, is focused on the medium-term and is aimed at restructuring and transforming our economy, to create a more resilient, equitable, and self-sufficient society.

I am here today Madam Speaker to lay the Phase 1 report of that Committee.

In Phase 1, The Road to Recovery Committee focused on three (3) immediate priorities:

The Committee concluded that the prevailing risks in the environment require increased focus by the Government during the next six (6) months, as the instigator, influencer and facilitator of aggregate demand and the protector of jobs and business activity. However, it also recognized the importance of acknowledging that both the private and public sectors will have to play significant roles in the short-term to jumpstart the economy.

The Committee has identified the following as short-term objectives:

It determined that the achievement of these objectives can best be accomplished in the following ways:

Increasing the allocation for Social Safety Net programmes as appropriate and where necessary (from $9 billion) in 2020, given that the number of persons accessing the programmes is expected to increase;

Implementing Safe Back to Work Protocols in accordance with guidelines established by the Ministry of Health;

Adopting policy decisions to immediately boost and sustain the Agriculture Sector with emphasis on:

The Team also recognized that COVID-19 has forced the Government, private sector and CSOs to rethink how technology can be leveraged to effectively navigate the crisis and accelerate the recovery process.

The Committee has defined a series of cogent, practical and compelling actions in the areas of

These enabling pillars will support and facilitate the success of this Roadmap as they cut across all sectors and will enhance the adaptability of the society to the dynamic forces of digitization and the failing globalisation. These will become the critical enablers on which we must create a reimagined society and economy post-COVID19.

The Committee, working in collaboration with the Ministry of Finance, has identified various innovative sources for mobilising additional financing for the next nine (9) months with the possibility of further funding over the next fiscal year, if needed.

The strategies required for rebooting the economy and the wider society require partnership among the Government, private sector, labour and civil society, agility in the supporting institutions and a culture that fosters productivity, efficiency, performance and harmony.

Several of the initiatives proposed by the Committee in its Phase One Report have already been adopted, in large measure by Government, on which the Minister of Finance and others would have already reported to this House and the Nation.

The Government is committed to putting the same effort into this fight to reshape and grow this economy post-Covid19 as it has put to date into the fight against COVID, with the intention of reaping the same positive results.

We are satisfied with the calibre of the members of the Team we have assembled and with their commitment to the task. At this stage Madam Speaker, permit me to acknowledge and extend the sincerest appreciation of the Cabinet and my own appreciation to the members of the Roadmap to Recovery team, (including former Minister Robert Le Hunte who at the inception worked diligently as co-Chair to jointly lead the team towards the production of this report). I wish also to thank those several other nationals and others co-opted to assist the Team, and the many hundreds of citizens and others who took the time and effort to submit their valuable suggestions and recommendations to the Team, mainly through the e-portal established by IGovTT specifically for this purpose. I would like to assure those persons that all of their recommendations have been read and considered, and I expect many of them to be featured in our Phase 2 report which is due to be completed shortly.

Madam Speaker as the renowned Albert Einstein said “in the midst of every crisis lies great opportunity” GoRTT shares the view with the Recovery Committee, many commentators and members of the public that Covid-19 has created the opportunity for us to re-imagine and re-engineer Trinidad and Tobago and it is imperative that we use it as a catalyst for, accelerated and sustained growth. The Government is committed to this end and is convinced that we can do it if we put our heads together as we have been doing and put our shoulders to the wheel. As I have said from the outset, we are all in this together and together we can not only survive but thrive.

Madam Speaker, I thank you. 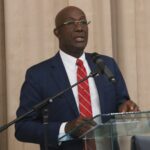