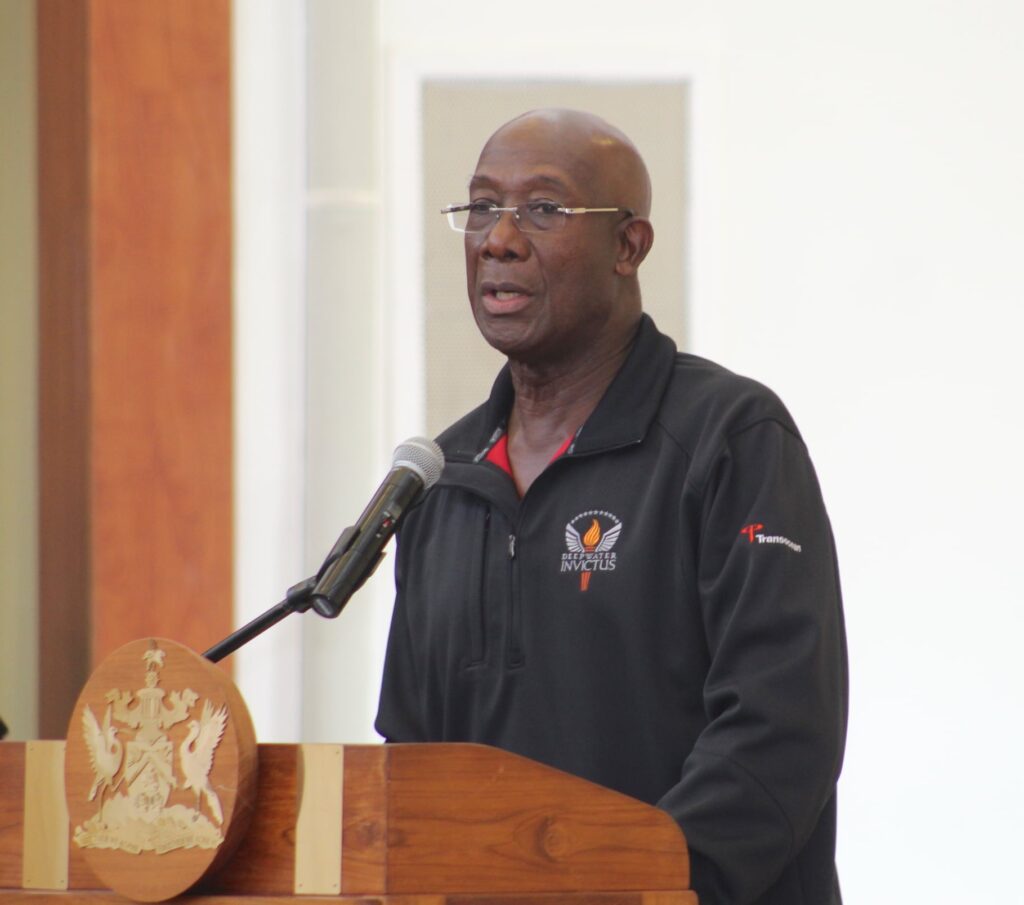 It is my great pleasure to be here today to commemorate the drilling of the Broadside Exploration Well in Block TTDAA 3, within BHP’s Southern Deepwater Acreage.

BHP and the Government of the Republic of Trinidad and Tobago have a relationship stretching back to more than two decades now. As the Hon. Minister of Energy and Energy Industries would have mentioned, in addition to work done in the shallow marine blocks in the East Coast Marine Area, BHP and its Joint Venture Partners were awarded nine (9) deepwater Production Sharing Contracts during the period 2012 to 2014. The award of contracts was then followed by the acquisition of 3D seismic data during the period March 2014 to February 2015, and the subsequent drilling of ten (10) exploration wells.

The drilling of the exploration wells took place in four phases, using the very same Transocean Deepwater Invictus Drillship that is being used for the Broadside well. During the first phase of the drilling campaign from May 2016 to December 2016, the LeClerc-1 and Burrokeet-2 wells were drilled in Blocks TTDAA 5 and 23(a) respectively.

During the second phase of the drilling campaign from June 2018 to October 2018, the Victoria-1 and Concepcion-1 wells were drilled in Block TTDAA 5, and Bongos-2 in Block TTDAA14.

The third phase of the drilling campaign ran from February 2019 to June 2019, during which the Tuk-1 and Bele-1 wells located in Block 23(a) and the Hi-Hat-1 well in Block TTDAA14 were drilled. Phase four, from August 2019 to October 2019, resulted in the Boom-1 and Carnival-1 wells being drilled in Block TTDAA14.

In between the first and second phases of drilling, I visited Australia in May 2018, where I met with the senior executives at BHP in Melbourne. There we discussed in detail BHP’s continued investment and presence in Trinidad & Tobago. I impressed upon them the mutual benefits to both Trinidad & Tobago and BHP of this Deepwater Exploration Programme. We both agreed and were committed to its success.

The Government gave BHP the commitment that we would do all that is necessary to facilitate the success of the Programme by amending the various Production Sharing Contracts, where appropriate, to ensure exploration success.

After the seismic acquisition and the first phase of drilling, it had become evident that the Exploration Programme had to be adjusted to optimize its chance of success. High level discussions took place between BHP and a team which included myself as Prime Minister, the Minister of Energy and Energy Industries Franklyn Khan and the Minister in the Office of the Prime Minister, Stuart Young. As a result of these discussions, the Government took the decision to facilitate the realignment of the exploration programme so as to give it the best chance of discovering new gas fields. A number of BHP’s Production Sharing Contracts were amended in such a way that, as far as possible, the overall work programme would be honoured, in terms of number of wells drilled, total footage and expenditure levels.

Ladies and Gentlemen, today I am pleased to announce that both BHP and the Government of Trinidad and Tobago have honoured those commitments made during my visit to Australia in 2018. The outcome is that we have seen some promising results thus far from BHP’s Deepwater Exploration Programme.

Of all the exploration wells drilled prior to Broadside, seven (7) were successful, including the Le-Clerc-1 well, which, as the Hon. Minister of Energy pointed out earlier, was indeed very successful. All told, BHP has already spent about US$1 billion and drilled a cumulative 108,893 feet, true vertical depth below mudline, since the inception of this deepwater campaign.

To date, BHP’s proven reserves stand in the range of 3.5 – 5 TCF, with probable reserves in the range of 1.5 TCF. BHP has applied to the MEEI to enter into the Market Development Phase for Blocks 23(a) and TTDAA 14. If found to be economic, first gas could be as early as 2026.

At this juncture, I would also like to mention another BHP project – Ruby Field Development. My understanding is that the Ruby Jacket is in Trinidad & Tobago ready for installation. Drilling is expected to commence in Q4 2020. Peak oil production is expected to be 16,000 barrels of oil per day in Q1 2022, with first production in November 2021.

Ladies and gentlemen, BHP has been consistently making history in Trinidad and Tobago. When BHP conducted its 3D seismic survey of over 21,000 square kilometres, which was done during the period March 2014 to February 2015, it was the largest deepwater seismic survey in the world at the time. This is particularly noteworthy, given the small size of T&T’s deepwater acreage.

And now, BHP is gearing up to make history again. Several of you in attendance today are probably familiar with the intimate details of the Broadside Exploration Well and you may be acutely aware of its significance. However, allow me to expand on its significance for the benefit of those persons here who may not be aware.

The Broadside well is not only significant because of its depth. The well will test the oil play within BHP’s Southern Deepwater Blocks, which includes TTDAA 3, 5 and 6. If the finds of the Broadside well are promising, it can inform the drilling of further exploration wells in nearby blocks. Additionally, a commercial discovery in any of Broadside’s Miocene targets could de-risk the majority of the prospective resources identified by Netherland, Sewell and Associates, Inc. (NSAI) in its audit of the country’s crude oil reserves and resources for year-end 2018.

Ladies and gentlemen, today we in Trinidad and Tobago, and indeed the world at large, find ourselves in a rather interesting period in history. All around the world, countries are dealing with the onslaught and the effects of the COVID-19 pandemic. Earlier this year, the demand for energy dropped historically low as a result of the imposition of travel restrictions and the rise of remote working.

It would be exceedingly rare for our daily lives to remain unchanged after experiencing such a significant global event. The COVID-19 pandemic has activated a level of digitalization that we would not have been able to predict one year ago. Remote working may be something that is here to stay, which could change our transportation needs and how we consume energy. Against the backdrop of a rapidly changing energy landscape, many countries and companies reaffirmed their commitment to the energy transition, as well as the decarbonisation of the energy value chain, and the development of new low-carbon businesses.

We must remain mindful of the shifts taking place, and the accelerated targets of many of our energy companies moving towards carbon neutrality, and do our part as the Government to lead and support the efforts to become more sustainable. However, we are still cautiously optimistic and proud of achievements such as BHP’s foray into the deepwater, as we rightfully should be.

It shows that we are still pushing the boundaries. More than a hundred years later, we are still commemorating firsts and milestones in the energy sector. It is indicative of an energy sector that is still alive, despite what some may say or choose to believe. And while we have begun pushing the boundaries in other areas, we are not going to abandon our energy sector overnight. We must acknowledge our strengths and play to them, whilst developing strengths in other areas.

Although the industry has fallen upon difficult times, both locally and globally, I am sure that neither BHP nor this Government is going to let years of work and investment go down the drain.

I have been following BHP’s Deepwater Exploration Programme with great interest over the years and I am pleased to bear witness to some of the results of years of perseverance, commitment and investment on the part of BHP and its Joint Venture Partners. The expenditure for the Broadside well alone is roughly US$85 million. Exploration, and especially deepwater exploration, requires high capital investment. This is the nature of the business. And when difficult times befall us, we must adapt and persevere to make good on those investments.

I am well aware that we are only part of the way there, and that even if there is a significant oil find, there may be other hurdles that stand between these discoveries and their commercialization. The reality is that these challenges may be greater than the ones we have faced in the past, because of the fact that commercialization in deepwater would be relatively new territory for us.

However, as we have done in the past, we have capitalized on our entry into new frontiers by adapting and learning quickly. This may be an opportunity for local companies and talent to upskill and become versed in deepwater operations. I expect there will be the need for such skill and experience as we move with agility and sharp focus to develop the substantial hydrocarbon resources of the deepwater.

Ladies and gentlemen, today I would like to take the opportunity to reassure you that BHP remains an important partner for us in the energy sector, and that the Government of the Republic of Trinidad and Tobago remains committed to continuing our work with BHP, and all other stakeholders, for the benefit of the citizens of Trinidad and Tobago.

On that note, I would like to close by congratulating the teams at BHP, its Joint Venture Partner, Shell, and the Ministry of Energy and Energy Industries, and everyone else who was involved in bringing this venture to fruition. I look forward to the results of the Broadside Exploration Well and what it holds for the future of deepwater exploration in Trinidad and Tobago.

Thank you very much for your attention. 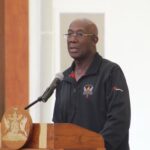