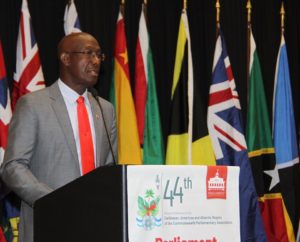 On behalf of the people and Government of the Republic of Trinidad and Tobago, I rise to welcome all the distinguished delegates and other dignitaries who are assembled here for the 44th Annual Conference of the Caribbean, the Americas and the Atlantic region of the Commonwealth Parliamentary Conference. This is not the first time Trinidad and Tobago has hosted our regional colleagues, I believe we last hosted you in 2010. The people and Government of Trinidad and Tobago are therefore gratified that the regional Commonwealth Parliamentary fraternity chose Port of Spain as the venue for this auspicious Conference, after a gap of some nine years.

Fellow Parliamentarians, we are indeed fortunate to belong to a region where democracy flourishes and where we can communicate, debate and exchange insights on lessons learned without persecution and fear of reprisal… where we can peacefully assemble and draw on rich Parliamentary traditions and benefit from the pool of knowledge and expertise in governance and lawmaking.

As I look in the audience I see some familiar faces (notice, I didn’t say “old’ faces) … faces of friends I have known over my 30 plus years of membership in this great Association of Parliamentarians.  I also see some new and unfamiliar faces … and I am reassured that our region is in good hands.

Friends and delegates, as you continue in your leadership journey, embrace the learning opportunities provided by the Commonwealth Parliamentary Association. When the CPA was founded in 1911 as the Empire Parliamentary Association, the world, as we know it, was a vastly different place. The British Empire constituted one sovereign parliamentary democracy. Today, there are 53 Commonwealth Nations, and the CPA has a membership of 180 branches. Our region of relatively small sovereign states remains a strong force in the CPA, comprising some nineteen branches.  So, coming together as a region on a regular basis is important … for it is here, among our peers, in this community of practice, that we learn from each other and deepen our commitment to the lofty ideals of the rule of law, separation of powers, human dignity, individual rights and freedoms and parliamentary democracy.

As we extol the virtues of fraternal cooperation and amity among states, the question that may arise is whether global collaboration is under siege. This issue is directly linked to the theme that has been chosen for this Forty-fourth Annual Regional Conference of the Commonwealth Parliamentary Association: “Globalization and Nationalism: Quo Vadis – Impacts on Commonwealth Parliaments”, (simply put, where are we going?).

Globalization was the catalyst identified for a bigger, better and boundless system of trade engagement, it was the much-anticipated salve and balm to ease and to bring relief to countries experiencing economic woe and stagnation. When the concept of globalization first emerged on the political and economic landscape, it held the promise of free trade, job creation, competitiveness, market access, information exchange, cultural connectivity and the free movement of persons and goods.

Today, we are realizing that this process, while replete with potential, was not without its socio-economic and environmental costs and burdens. Trade violations, unfair trade practices, information misuse and environmental damage are but a few of the challenges emerging from the underbelly of globalization. Perhaps the harshest reality to be faced is that in our globalized world, inequality within and among countries has increased, and the gap between the haves and the have-nots is as glaring as ever. Today, this very all-embracing concept is being weaponized against us, the vulnerable.

Indeed, the world is by far a vastly different place compared to the 1900’s and the 1960’s when latterly, the sweeping wave of nationalism sparked and smoldered the embers of independence for many. We in Trinidad and Tobago confidently grasped ours in 1962. Whereas globalization once promised the removal of barriers, open doors and open borders, the creeping rise of radical nationalism is breeding dangerous discontent and disunity as regional alliances fracture. In certain quarters, the focus is to look inward to myopic interests and insular objectives, rather than looking outwards towards the common good of mankind. This simmering discontent has given rise to intolerance, open racism and xenophobia, with a proliferation in hate crimes and conflict worldwide. Gates are being shut before dialogue can even commence, in the name of country and self-preservation.

So, the question that we contemplate, fellow Parliamentarians…is quo vadis… where are we going? How do we prepare our Commonwealth nations to address these very real risks and threats? And how do we, policymakers and legislators in the Caribbean, Americas and Atlantic region forge solutions to tackle global issues and concerns?

In a world of inequalities and uneven development, the Commonwealth distinguishes itself as a family of nations which is less preoccupied with structure and hierarchy, and more concerned about performance and connectivity. In this divided world, lies our Association whose membership, regardless of gender, race, religion or culture, is united by communal interest, respect for the rule of law and the pursuit of positive ideals of parliamentary democracy. I commend you all for keeping at the forefront of your deliberations the threat we all face, including threats to the survival of this great Association, at a time of world unease. I say no more on that point and leave you to your reflections.

Friends and delegates, I wish time permitted me to join you on Tuesday when you will discuss the committee system and the challenges faced by our region which still utilizes the term part time Parliamentarians.  After more than 30 years as an MP, I am still befuddled by that term.  My friends, colleagues, the Parliament is the institution that represents the people’s voice in government. It is the cornerstone of democracy. This important institution, of which we all hold membership, fulfils two critical functions: to legislate and to hold government to account. In doing so effectively, we must all engage in a myriad of activities all of which matter to our people.

The fundamental objectives of parliamentary oversight are to promote the people’s well-being and improve governance over their affairs. Oversight processes assess the impact of government action on society, help ensure that appropriate resources are provided to implement government programs and identify unintended or negative effects of government policy and actions…. and may also shed light on corrupt activities. Oversight and accountability are major dimensions of the complementary democratic mandates of government and Parliament. Governments provide services to citizens; parliaments hold governments to account by questioning and challenging their actions and policies and making recommendations for change. No matter how tedious and repetitively boring these assignments may be, we must not be daunted in their pursuits, regardless who we might offend in the process.

Fellow Parliamentarians of the Caribbean, Americas and Atlantic Region of the CPA, as we converge here in Port of Spain to foster, renew and fortify our ties, to expand regional cooperation and to review current parliamentary processes, let us remember the 1.8 billion young people around the world between the ages of 10 and 24 who are looking to us to deliver fairness, security, prosperity, sustainability and ethical conduct, starting in our own corner of the globe.  Political participation by young people has emerged in recent years as a crucial new focus of efforts to enhance democracy worldwide.  I commend the regional CPA in its continued efforts to include programs to identify and train youth activists to become political leaders of tomorrow.

The seeds of noble ideals and multilateral efforts to attain sustainable development will only find fertile ground in Commonwealth Parliaments that are collectively willing and determined to promote democracy and good governance in all its endeavours.  Our Parliaments must also welcome the opportunities presented by globalization whilst eschewing the dangerous and divisive beliefs and mindsets that are cultivated by new forms of nationalism.

The sacred space of the Parliament is where ideas, goals and ambitions are to be translated into tangible outcomes for our citizenry. It is therefore no small feat when we Parliamentarians gather to equip ourselves for better governance, stronger representation and enhanced service delivery by sharing knowledge and best practices and discussing ways and means of enriching the quality of life of our peoples through the critically important mandate of the CPA.

In contemplating the future of Commonwealth Caribbean Parliaments, quo vadis, I am reminded of the words of Her Majesty Queen Elizabeth II, patron of the CPA, who said:

“As we look for new answers in the modern age, I prefer the tried and tested recipes, like speaking well of each other and respecting different points of view, coming together to seek out the common ground, and never losing sight of the bigger picture.”

Again, I warmly welcome you to our beautiful country. I am aware that many of you are not strangers … and I urge all of you to not be strangers. Members of my Government and I look forward to meeting you in the days ahead at the events that Madam President and Madam Speaker have organized on your behalf. I see listed on your agenda the opportunity to appreciate our flora and fauna and I have no doubt that you will thoroughly enjoy that experience!

Please accept my Best Wishes for a successful conference!

Thank you for your attention. 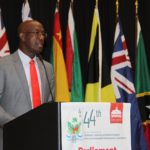