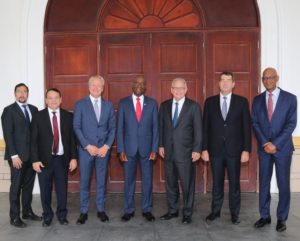 At the meeting both parties expressed confidence that the empowered negotiating teams were working assiduously to conclude negotiations. Shell also reiterated its commitment to Trinidad and Tobago.

Mr. Holliday, who is visiting this country for the first time, will host a luncheon for key leaders of the energy sector tomorrow. Prime Minister Rowley will deliver the feature address at the event.