Numerous matters were discussed with the agreement that the Government would continue communicating with BP for the further development of the energy sector of Trinidad and Tobago.

The BP executive team along with the Honourable Franklin Khan, Minister of Energy and Energy Affairs is expected to make their public announcement this afternoon at 2pm. 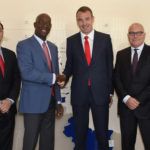