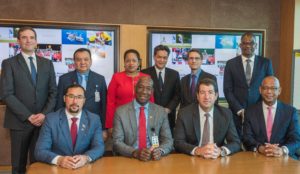 Prime Minister Dr the Honourable Keith Rowley today (Monday 03 June, 2019) visited Shell’s Woodcreek Campus in Houston, Texas where he and his delegation received an update on the company’s business as well as a review of its planned growth portfolios for Trinidad and Tobago.

On his arrival at the campus Prime Minister Rowley met with De La Rey Venter, Executive Vice President of Shell’s Integrated Gas Venture business, Derek Hudson, Vice President and Country Chairman of Shell Trinidad and Tobago and Eugene Okpere, Chief Operating Officer Shell Trinidad and Tobago for a follow-up on discussions held last week during a visit to Shell’s offices in The Hague and Amsterdam.

Presentations made during this working visit highlighted the significant increase in gas production from the Starfish field. During Dr Rowley’s visit to the Woodcreek facility in March 2017 the energy company was focused on overcoming the challenges it faced after the initial Starfish start-up did not produce as first anticipated. The Prime Minister and delegation also received a status report on the upgrade to Shell’s existing infrastructure which is a significant investment aimed at ensuring continued and increased production.

While at the campus Dr Rowley met with Shell’s Trinidad and Tobago staff members who are currently serving on expatriate assignment at Shell’s Woodcreek Campus, many of them are working on projects specifically related to Trinidad and Tobago.

Tomorrow (Tuesday 04 June, 2019) the Prime Minister will meet with high-level executives from EOG Resources and BHP. 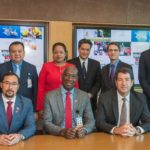