Recently, the OWTU served a strike action notice to State-owned Petrotrin in response to a breakdown in wage and salary negotiations for the period 2014-2017/2018.

The strike was averted following extended conciliation talks at the Ministry of Labour and Small Enterprise Development. After prolonged discussions between the company and the OWTU, parties agreed to a payment of 5% and conciliation would continue at the Industrial Court.

The Government will be putting together a seven (7) man team to review and examine Petrotrin’s operations, which will report to Cabinet with respect to the restructuring of Petrotrin. The Union will nominate two (2) members to this team and it is expected that this team will report to the Cabinet within three (3) months. 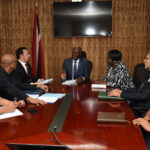