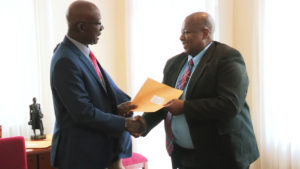 Prime Minister Dr. the Honourable Keith Rowley presented instruments of appointment to a seven-member committee tasked with conducting a review of the operations of the Petroleum Company Limited (Petrotrin) on Monday 13th March 2017 at the Diplomatic Centre, La Fantasie, St. Anns.

This appointment honours a Cabinet decision made on February 23rd 2017 to review operations at the company in light of falling revenues, allegations of mismanagement and decreasing oil prices worldwide. The committee is tasked with making recommendations for restructuring of the company and its first report is scheduled to be submitted on June 1st 2017.

The committee will be chaired by Mr. Selwyn Lashley, Permanent Secretary, Ministry of Energy & Energy Affairs.

Other members are as follows:

Mr. Robert Riley, Head of Safety and Operational Risk, Competency and Capability Development at the BP Group in London and former Chairman and Chief Executive Officer of BPTT (absent) 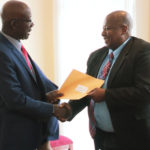