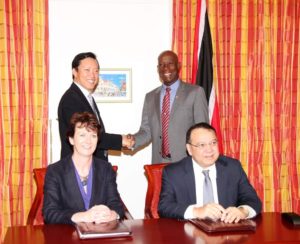 Minister of National Security, Communications and Minister in the Office of the Prime Minister, the Honourable Stuart Young played a crucial role in these negotiations and was present for the signing. The signing was also witnessed by Chief Operating Officer, Global Upstream Regions at BP, William Lin, Head of Planning and Commercial Finance at BPTT, Richard Eaton and BPTT’s Managing Counsel, Wendy Fae Thompson.

This agreement was the result of negotiations which also dealt with the future LNG pricing to be applied to Atlantic LNG which will accrue significantly enhanced annual revenue for Trinidad and Tobago. It also entailed the extension of the South East Galeota Exploration & Production licence. The agreement will also see BPTT begin the Cassia Compression Project as well as the Matapal Gas Projects which will develop the gas resources discovered by BPTT in 2017. The energy company is expected to invest $1.8 billion USD in these two projects.

The empowered negotiating teams will meet again in January 2019 as they continue to work towards the conclusion of all outstanding matters between the parties.