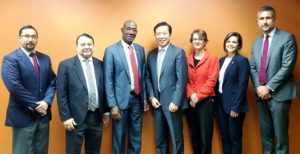 During discussions both parties reinforced their commitment to resolving the important elements of the negotiations between the empowered negotiation teams.

This Government remains committed to building strong relationships with our energy partners as it continues its work to secure the best return for the people of Trinidad and Tobago.