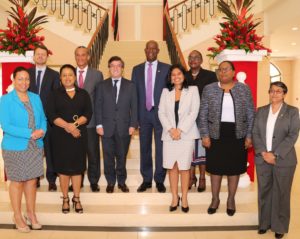 Prime Minister Dr the Honourable Keith Rowley and a team of accompanying ministers and other Government officials met today (Monday 19th November 2018) with a high-level team from the Inter-American Development Bank (IDB). President of the IDB Mr Luis Alberto Moreno led the team of officials who represented the bank.

The meeting was held at the Diplomatic Centre, La Fantasie, St Anns.

Included on the agenda for discussion at the meeting were the new sovereign guarantee loans currently in the pipeline for 2019, the status of the negotiations for the loans for the construction and outfitting of Early Childhood Centres in Tobago and the loan for the upgrading and revitalisation of urban areas in Trinidad, most notably the East Port-of-Spain and Piccadilly areas.

The Innovation and the E-Government initiatives also formed an integral part of the discussions. The new developmental projects for Trinidad and Tobago were also discussed, including the San Fernando Waterfront, the La Brea Dry Docking Facility, and the development of the tourism product for Tobago, which includes marina facilities and the Sandals project.

Prime Minister Rowley was accompanied by Minister of Planning and Development the Honourable Camille Robinson-Regis, who serves in the role of Governor of the IDB, Minister of Foreign and CARICOM Affairs Senator the Honourable Dennis Moses, Minister in the Ministry of Finance Senator the Honourable Allyson West, Permanent Secretary in the Ministry of Planning and Development Ms Joanne Deoraj and Ms Ayleen Alleyne-Ovid Senior Counselor for Trinidad and Tobago in the Office of the Executive Director, based at the IDB.