Prime Minister Dr the Honourable Keith Rowley, and a CARICOM delegation, met with Federica Mogherini, Vice-President of the European Commission in Montevideo, Uruguay.

Prime Minister Dr the Honourable Keith Rowley, along with a CARICOM delegation, met with Federica Mogherini, Vice-President of the European Commission and High Representative of the European Union for Foreign Affairs and Security Policy today (Thursday 07 February, 2019) in Montevideo, Uruguay.

During the meeting CARICOM underscored the importance of the need for the EU as an organisation and its individual member states to recognise the presence of and exposure of our neighbouring territories in this Venezuelan crisis. The CARICOM delegation received assurances from the EU that its interests will be welcomed as part of any discussion or mechanism as all parties attempt to work together to bring about a peaceful, sustainable outcome without the use of force and through a process that is owned by the Venezuelan people.

The Uruguay delegation confirmed that in their meeting with the EU the Montevideo Mechanism remains intact and has been reaffirmed by the CARICOM delegation. 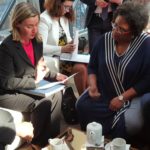