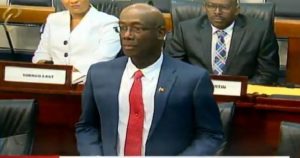 Madame Speaker, pursuant to your leave, I provide this personal explanation in accordance with Standing Order 23. I am responding to spurious and wholly untrue allegations that were made against me, in this House, by the Member of Parliament for Oropouche East during a contribution that he made to the House on October 9th, 2018. The record needs to be set straight.

Madame Speaker, you would recall that on December 15th, 2017 the Member for Oropouche East made an allegation, that he immediately withdrew from, when challenged by the Honourable Attorney General to take ownership of. The allegation that the member made was to the effect that a “very senior government minister” was involved in the matter involving AV Drilling and Petrotrin. Madame Speaker, in the Guardian newspaper of December 16th, 2017, reporter Khamal Georges described the events in the House to which I refer as follows,

“Oropouche East MP Dr. Roodal Moonilal made a scandalous allegation against Prime Minister Dr Keith Rowley and the owner of A&V Oil and Gas Hanif Baksh in Parliament last evening. However, moments after making the statement, Moonilal was forced to withdrew (sic.) it.

… Earlier in his contribution, he told the House of Representatives that he recently visited Florida to “conduct research” and would later reveal his findings. … Moonilal read from an email after he said Attorney General Faris Al-Rawi “invited” him to read the contents of the documents in his possession.”

At the time, the member for Oropouche East was asked to take ownership of his allegation that I was involved in some nefarious bank transaction involving the transfer of a sum of money to me in a bank account in Miami and that the evidence of this was contained in an email, that he, the member, had in his possession which he purported to initially refer to, but immediately withdrew from, without producing a copy of the email to you or the House, Madame Speaker.

Of course, Madame Speaker, even though the member ran from what he initially said, and withdrew, the damage and harm that he intended to cause in a most malicious manner was already done. This particular member for Oropouche East uses the fact that our proceedings are carried and broadcast live via radio, television and on the world wide web to a global audience to malign, and attempt to damage me, and other members of the government with complete fabrications of untruths, putting his malicious untruths out there and then withdrawing from same, with the damage to reputations already being done.

Madame Speaker, this type of behaviour is un-parliamentary, unbecoming of any member of parliament and to be condemned. It is deserving of being brought before the privileges committee of the parliament and appropriately dealt with.

Yesterday, on October 9th, 2018, the member for Oropouche East, once again in this unacceptable manner, came to the House and engaged in this behaviour under the cover of parliamentary privilege. His colleague, Devant Maharaj, just before the member spoke, during the tea break, began circulating the following message via social media and this Madame Speaker, is clear evidence of collusion and malice,

“Listen to Dr Roodal Moonilal, MP next in the Budget Debate Dr. Moonilal promises FIREWORKS in his contribution for the Opposition UNC.”

Minutes later, Dr Moonilal proceeded to enter the budget debate and tell this House, its members, and the listening and viewing audience, which includes the members of the public beyond the shores of Trinidad and Tobago, that he had been traveling to Miami (similar to what he said in December 2017) on a few occasions because he “had wind of something.” He said that he had information, “that pointed [him] to a bank in Florida C&C International Regents Bank Account 0229459435 ABA062005690 swift code UPNBUS44MIA, 8200 North West 36 St Doral Florida, 33166.” He went on to state that the he had a document, a bank document, that showed ‘a beneficiary account number IBAN foreign with a number 1145145 No purpose of funds, so it is a transfer document beneficiary recipients, no purpose of funds, but additional instructions for attention.” And then Madame Speaker, he said:

Madame Speaker, at this stage, the malicious and damaging die was cast. The Honourable Attorney General then intervened and asked that the member take ownership of his allegations. There was gamesmanship displayed and reluctance on the part of Dr Moonilal to bolt his allegations against me to his chest. Eventually under much pressure, the member for Oropouche East said,

The member verbally identified me at this stage Madame Speaker. He however, intentionally failed to provide a copy of any single document to you, the House or even to the public, himself, to support his allegations against me. However, minutes after he spoke in this House, pieces of the defamatory documents were broadcast worldwide by individuals and agents, including other members of this House.

Madame Speaker, what the member did was carefully, intentionally and maliciously calculated to defame me, damage me (and my reputation). He imputed impropriety to me and provided only bogus documents. This is unacceptable and cannot be left unchallenged.

I state here, as I have done already elsewhere, that there is absolutely NO truth to what the member for Oropouche East has stated and/ or imputed. I have no bank account in Miami, USA; I was not party to any banking transaction with Mr Deokiesingh, Formula One Trading or any person or persons with respect to any bank in Florida, the United States, or any bank in the world for that matter Madame Speaker.

Let the member for Oropouche East provide the document, this bank document that he got wind of, made trips to Miami to get and has in his possession, to you, the House and to the media outside of Parliament. I have observed that as he has taken ownership of his performance within these walls he has since confirmed his libel outside. The treatment of this development is for another day in another place.

Madame Speaker, I have today instructed my Attorneys at Law to write to the Bank that the address he quoted seems to be at, “Regions Bank, 8200 NW 36th Street, Doral, Florida 33166” to obtain from them confirmation that I have never done any banking with them whatsoever, because this is the truth.

The member has a modus operandi that whenever, he comes to parliament and hides behind parliamentary privilege to malign me or any other member, he does not provide any document to you or the House, but almost instantaneously, the allegation and any document that he purportedly has in his possession appears on Facebook and other social media it is then circulated on social media by primed persons associated with the UNC opposition and on Facebook pages controlled by the UNC Opposition. Additionally selected, sound-bite video recordings of his contribution where he abuses parliamentary privilege is also circulated on social media. Madame Speaker, I submit that this is calculated to damage me irreparably.

I remind you Madame Speaker, and the population, by extension, that this same member when he was the leader of Government Business in the House between 2010 and 2015, told us that he approved that distasteful rant by the then member for Tobago East, Vernella Alleyne-Toppin, when she came to this House and in the most vicious, vile, hateful and repulsive manner cast all manner of aspersions not only on me but on my deceased father. This is now becoming a habit of this member for Oropouche East.

Madame Speaker, I reject without reservation the allegations made against me by this member in his budget contribution yesterday and I state in the clearest possible manner to you, this House and the public, that I have had no banking transaction of the nature suggested by the member for Oropouche East, I have no bank accounts in Miami, Florida. Many years ago, in the 1970s, I opened a Bank Account in New York, USA to change travellers cheques, I am not even sure it is still an active or open account, but apart from that I have had, and have no, bank account in the USA and I was not party to any banking transaction with Mr Vidya Deokiesingh and/ or Formula One Trading.

The email that the member referred to and that I have seen being circulated by UNC members, does not involve me, the email address is NOT mine, it is jrowley.rawlins@gmail.com that is NOT my email.

In these circumstances, members of the House will pursue the appropriate action against the member for Oropouche East and I will be seeking legal advice as to what action I can pursue outside of Parliament against those who have republished these fabrications.

Madame Speaker, I thank you for the opportunity to have provided this explanation and to have set the record straight.