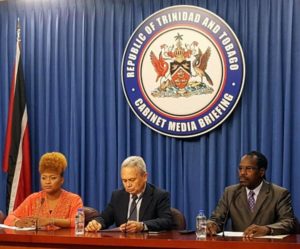 Cabinet has approved the consultations on the National Cultural Recognition Policy. This was stated by Minister of Community Development, Culture and the Arts, the Hon Nyan Gadsby Dolly at today’s Post-Cabinet Media Briefing. Minister Dolly said that Trinidad and Tobago is rich in culture and has a diverse cultural heritage and as such, there is the need for formal recognition of cultural excellence. The policy is expected to:
• Develop the competencies in the arts
• Provide positive role models for our young people
• Encourage excellence in the arts
• Manage the expectations of citizens with regard to cultural pursuit.

The National Cultural Recognition Policy suggests cultural recognition in three categories:
• Cultural awards – which will be hosted annually
• Cultural ambassadors – 3 ambassadors per year to promote and advance the culture of Trinidad and Tobago
• Cultural legend award – one award per year who has a long and meritorious career in the arts

Consultations are expected to happen within the next 2-3 weeks as the policy is intended to be launched at CARIFESTA, which takes place August 16-25th 2019. The awards are expected to cost less than one million dollars per year and the first installation of the awards would be in 2020.

Venezuelan Registration to Start on Friday 31st May

The registration process for Venezuelans migrants will start on Friday 31st May and continue every day for two weeks – with the exception of June 5th, 2019 which is Eid-Ul-Fitr. Acting Minister of National Security and Minister in the Ministry of the Attorney General, the Hon Fitzgerald Hinds made the appeal to all Venezuelans legally or illegally in Trinidad and Tobago to register during the period outlined.

Minister Hinds stated that there will be three registration Centers – Queen’s Park Oval in Port-of-Spain, the Achievers Banquet Hall in San Fernando and the Caroline Building on Wilson Street, Scarborough, Tobago.

All registrant must have their completed registration forms, passports and cedula (for each family member), birth/marriage certificates, proof of address in Trinidad and Tobago, two passport sized photos and other relevant documents.

Minister Hinds noted that ONLY those who have residency status, pending applications or work permits are exempted from this process. Persons failing to comply with the Government will have to face the consequences as per the law. He also indicated that this Government registration is separate from any other registration process being conducted in the country.

Acting Prime Minister and Min of Finance, the Hon Colm Imbert noted that according to figures received by the Chief Immigration Officer, there are approximately 3,800 Venezuelans in Trinidad and Tobago legally. He also stated that between the period 2016 – 2019, the total number of Venezuelan citizens who arrived through legal ports of entry and overstayed is 9,080 with only 502 recorded as overstaying for the first five months of 2019. Min Imbert noted that according to statistics, there are from 2016-2019,12,257 UNHCR registered asylum seekers T&T.

Minister Imbert also stated that despite the rumors, the Government has not accepted any financial aid from any international organization for dealing with the Venezuelan registration situation. He indicated that accepting international aid has foreign policy implications and that the Gov’t does not see the need at the moment to access such. 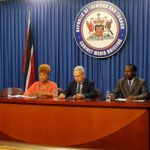 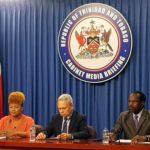