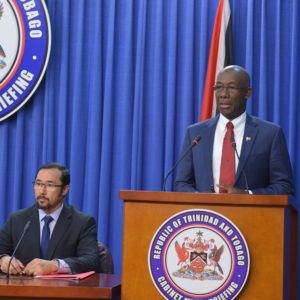 The Interests of T&T Nationals Must Come First

Prime Minister Dr the Hon. Keith Rowley is assuring the population that the interests of the people of Trinidad and Tobago come first in light of the influx of illegal Venezuelan immigrants to this country.

Speaking at today’s Post Cabinet Media Briefing Dr Rowley said Government’s first and primary responsibility is to protect the interest of the people of Trinidad and Tobago.

He said this country cannot say it is protecting its borders and pick up people, bring them from the border and let them go in the streets.

He said as head of the National Security Council he will hold a meeting tomorrow where they will discuss how this matter will be handled.

The Prime Minister added that this country has to limit its exposure to the fallout in Venezuela because this little island cannot be the solution to millions or hundreds of thousands of migrants from Venezuela.

He said Government will review its open-door policy in relation to Venezuelans coming to this country.

The Prime Minster announced that he will lead a Government delegation to Shell headquarters in Holland where an agreement will be signed based on the outcome of negotiations with that energy company.

He said Cabinet today approved the agreement that is to be signed in Holland and although he is not in a position to give the final outcome of the agreement at this time, he will do so when he returns from the trip.

The delegation will also visit the BP headquarters in London and EOG in Houston, Texas.

Centralized guidelines will be issued to treat with the refusal of requests under the Freedom of Information Act.

Prime Minister Rowley said he has asked the Honourable Faris-Rawi, Attorney General and Minister of Legal Affairs to send a circular to all Government agencies instructing them to inform the Office of the Attorney General on all their decisions to deny requests under the Freedom of Information Act.

He said this decision has been taken after Cabinet found that many of the requests that have been denied under the FOI Act by Government agencies have been subject to lawsuits that have amounted to millions of dollars in legal fees being paid by the taxpayers.

The Prime Minister said National Security issues and Cabinet matters are the two main areas where there may be a restriction on the information shared, but all other information should be shared with the public when requested.

Prime Minister Rowley said as head of the Cabinet he has also instructed Senator the Honourable Franklin Khan, Minister of Energy and Energy Industries to instruct Petrotrin to make available and public the two pieces of information on the State-owned company’s decision not to pursue a lawsuit against former Petrotrin Chairman Malcom Jones.

He said because the matter has been so misrepresented by the Opposition Leader he gave the instruction which will allow the public to read the information and decide for themselves whether the decision taken by Petrotrin against its former Chairman was right or wrong.

The two witness statements were given at arbitration and have been the subject of a Privy Council ruling that gave permission for judicial review to clear up concerns. However, the Prime Minister said the Privy Council made no finding in its judgement on the issue.

He added that the Opposition Leader has been using the issue as a political ploy to form a defense for two UNC members who are now before the court. 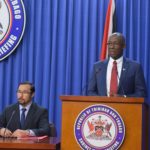