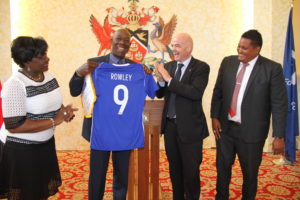 Prime Minister, Dr. the Honourable Keith Rowley is presented with a personalised FIFA football t-shirt by FIFA President Gianni Infantino today after their meeting at the Diplomatic Center, St. Ann’s. Looking on are Minister of Sport and Youth Affairs, the Honourable Darryl Smith and Minister of Planning and Development, the Honourable Camille Robinson-Regis.

The meeting was part of a series of activities planned for the first official visit by the FIFA President to Trinidad and Tobago.

Prime Minister Rowley and Mr. Infantino discussed Trinidad and Tobago football, and the role of sport in regional development. The Prime Minister also expressed the importance of accountability and transparency in sporting bodies and challenged FIFA to lead the way in ensuring that world football is scandal-free. He expressed his government’s commitment to the growth of Trinidad and Tobago football and the desire for a  positive working relationship with FIFA.

Minister Darryl Smith addressed the gathering and welcomed the FIFA delegation to Trinidad and Tobago. He expressed his pride at the changes the TTFA has made to clean up local football and indicated his excitement at the FIFA’s plans for football in the primary schools, and in women’s and girls’ football.

The FIFA President is scheduled to participate in a series of informal events over the course of his visit including a football match between a FIFA/ TTFA team and a Government/SporTT outfit at the Ato Boldon Stadium.

Prior to his arrival, the FIFA delegation visited Aruba, Grenada, Guyana and several African nations to hold discussions on world football. 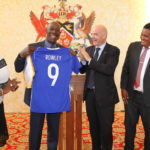