PM: Government will not Submit to the Threat of Anarchy 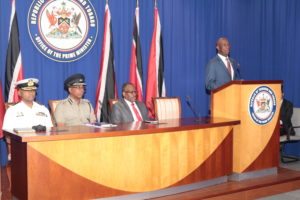 There is no excuse for the lawlessness that occurred at Beetham Gardens and at the Clifton Street Towers off St Paul Street, Laventille yesterday (Wednesday 23 November, 2017). This kind of behaviour only guarantees that resources which should be made available for communities are instead utilised for national security.

Prime Minister, Dr the Hon Keith Rowley made these statements while hosting a press conference today (Thursday 24 November, 2017) to address the violent response by some residents to police activity in these communities.

The Prime Minister said in recent times persons have resorted to blocking roads and burning debris to highlight their grievances. He said it was now time for the Government to draw the line and communicate that this reaction is unacceptable.

Dr Rowley stated, “No person in Trinidad and Tobago is above the law. As Prime Minister, I want to give the national community the assurance that the Government’s support for national security is unwavering. Persons who are inciting violence will find no sympathy.”

The Prime Minister noted that many people are living in fear because of the actions of criminals. He stressed that his Government will not submit to the threat of anarchy and reiterated that the country has the resources needed to ensure that this expression of law breaking does not become a daily feature of life in Trinidad and Tobago. 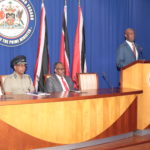