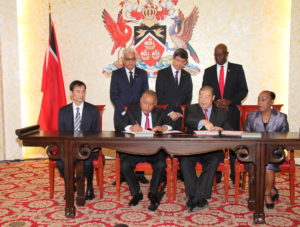 Government signed the agreement for the construction of the new Central Block of the Port of Spain General Hospital today (13 May, 2019) in a ceremony at the Diplomatic Center, St Anns.

Due to the old block’s aged infrastructure and damage from the 6.1magnitude earth­quake last Au­gust, it became necessary for Government to replace the building.

The project is expected to be completed in two phases – the first being demolition of the old block, which was started last September. The second phase will include the construction of the new block, which is estimated to take 24-30 months to complete. The design and construction will be in accordance with international best practices.

The one billion dollar project will be completed through a public-private partnership with Shanghai Construction Group Caribbean Limited (SCG Limited). SCG Limited submitted the best value for money proposal, which came in at $600 million less than the oth­er bidder. 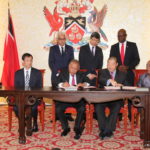