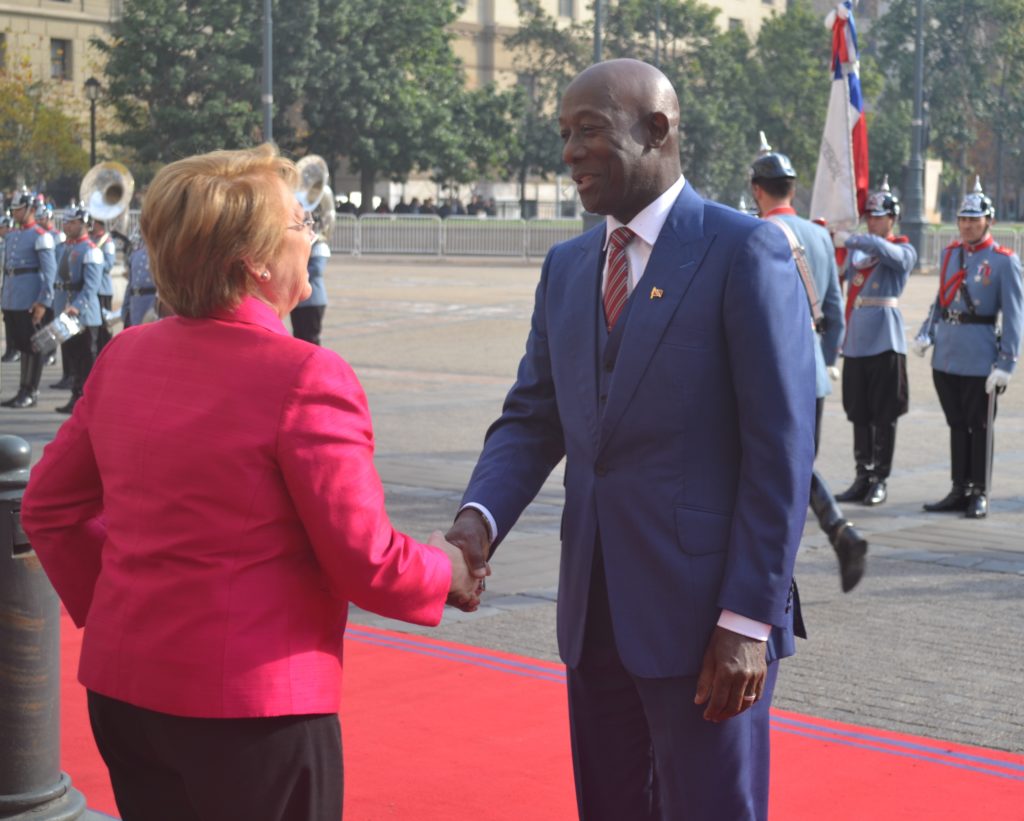 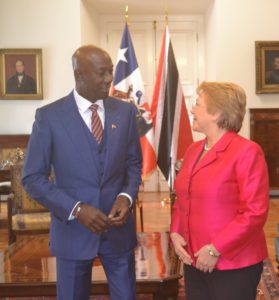 Prime Minister, Dr. the Honourable Keith Rowley began his first of a two-day official visit to Chile this morning (Monday 29th May 2017) with a wreath laying ceremony at the Monument to Bernardo O’Higgins, considered to be the liberator of Chile.

Immediately thereafter, the Honourable Prime Minister and his delegation made its way to the La Moneda Palace and were greeted by the President of Chile, Her Excellency Michelle Bachelet. After the official ceremonial welcome the two leaders met with their respective Ministers of Foreign Affairs. The leaders then led their delegations in a bilateral meeting.

During the bilateral discussions the two leaders recalled their meeting at the 37th inter-sessional meeting of CARICOM heads of Government. On that occasion they addressed issues of defence, security and further cooperation on other matters.  It was noted that there have been over 50 years of bilateral relations between Trinidad and Tobago and Chile.

They also articulated their shared views on the importance of democracy, respect for human rights, the Rule of Law, the Principals of International Law, social progress, economic development, transparency as well as the common interests of promoting the well-being of their citizens.

Both leaders pledged to grow and deepen relations in the areas of trade, technical cooperation, energy and culture.

The trade ministers discussed bringing business leaders from both countries together to explore mutually beneficial and joint business ventures.

Trinidad and Tobago remains focused on maintaining its position as a main supplier for fertilizer and other agri-products to Chile.

Both leaders expressed concern about climate change as especially since Chile has an extensive coastal border and Trinidad and Tobago is very concerned with improving and preserving the waters surrounding the twin island Republic..

The President of Chile expressed satisfaction with the level and importance of technical cooperation between the two countries and Trinidad and Tobago’s participation in programmes developed by Chilean agencies such as the Chilean Agency for International Cooperation for Development as well as collaborative efforts between the Office of Disaster Preparedness and Management in Trinidad and Tobago, the Caribbean Disaster Management Agency and the Academy of Fire Fighters in Chile.

In the area of culture the two leaders expressed an interest in learning and appreciating each other’s language and culture.  In this regard they are exploring the possibility of a language learning exchange programme through a partnership between the University of Chile and the University of Trinidad and Tobago.

Prime Minister Rowley thanked President Bachelet for her assistance with the issue of the withdrawal of correspondent banking relations for Caribbean financial institutes. 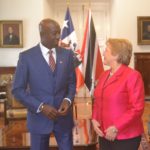 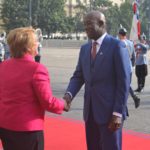