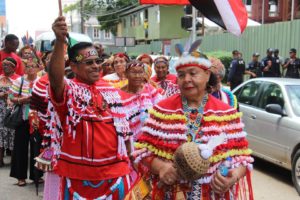 MESSAGE TO THE NATION

FROM DR THE HONOURABLE KEITH ROWLEY

PRIME MINISTER OF THE REPUBLIC OF TRINIDAD AND TOBAGO

ON THE OCCASION OF

On behalf of the people and Government of Trinidad and Tobago, I extend warm greetings to the First Peoples of our national community.

In October 2016, I gave a commitment to the First Peoples Community that serious consideration would be given to their longstanding requests for recognition in the form of a one-off national holiday, to formally recognise their presence and contribution to our country. Today, October 13th, 2017 – a national holiday- I proudly stand with the citizens of Trinidad and Tobago to recognise and celebrate the first inhabitants of our beloved nation.

While it has been established that the history of the Americas and the Caribbean Region is punctuated with violence, confrontation and subjugation, it is also a history of courage, bravery, resistance and an enduring aspiration to preserve traditions through which we derive our identity. In Trinidad and Tobago the indigenous Amerindian populations were the first to suffer the onslaught of European colonisers. Demoralised, disillusioned but never defeated, our First Peoples, largely recognised through the Arima-based Santa Rosa First Peoples Community, have continuously strived to preserve and revitalise their Amerindian history and traditions.

Many persons among us may have participated in the Santa Rosa First Peoples Community Annual Santa Rosa Festival, in honour of the community’s patron saint. More recently during National Patriotism Month 2017, heritage tours were organised to local sites dedicated to preserving the legacy of our First Peoples. So much of Caribbean history and the history of Trinidad and Tobago has been lost or distorted that it is immediately necessary for us as citizens of Trinidad and Tobago to research, hold on to and share our stories with one another and with the world.

We, in Trinidad and Tobago, are a people of diverse origins. We have weathered many storms and together we will continue to draw on the strength of our ancestors to build a strong and resilient nation.

Today as the First Peoples Heritage Week draws to a close, let us all take this opportunity to acknowledge our First Peoples and celebrate the richness of our collective cultural ancestry.

Do have a safe and enjoyable holiday. 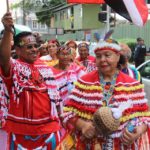