GOVERNMENT TO ADDRESS MARIJUANA LEGISLATION IN 2019 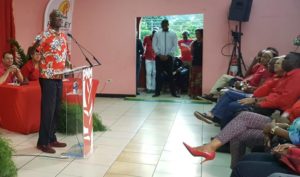 In 2019 the Government will examine the legislation regarding marijuana use which Prime Minister Rowley says largely imprisons young men from certain communities.

Dr Rowley said: Our jails are full of young people, largely young men, because they smoked a marijuana joint and the law in this county makes the smoking of a marijuana cigarette a criminal offence.

(But) the marijuana smoking in the upper echelons of society where a serious number of acres of marijuana is burnt, very few of them end up in jail. If they even get charged it is very unlikely that they will end up in the jail. But the ‘gift’ for those who are from Laventille, Enterprise or Cunupia – if you get caught with marijuana you’re going to jail.

Many of them can’t raise bail so they rot inside the jail. That is a matter of social justice that needs to be addressed

It is my responsibility as leader of this country to have this matter properly examined and I am in discussion with the Attorney General to determine how we treat with this problem.

As I examined this problem in recent times, I have met fathers who’ve lost their jobs because they smoked a marijuana cigarette and they are in jail. Their children are unattended and unsupported. I am sure that was not the intention of the law.

But of course it has to be managed because I do not buy for one moment that there are not deleterious effects from smoking marijuana but the management of the offence has created its own problem and this country must now address it.

Prime Minister Rowley was speaking at a political meeting in Diego Martin when he made the comments.