Government and Shell Moving Toward Agreements by September 2018

The parties agreed to establish empowered negotiating teams that will meet from the second half of May 2018.

These teams will work on a priority basis, on a number of matters including, but not limited to, Atlantic LNG and the socio- economic contribution of the LNG business to Trinidad and Tobago, extensions of various upstream Production Sharing Contracts (PSC), Venezuelan initiatives and new domestic gas arrangements.

It is expected that the negotiating teams will report back to their principals with agreements by September 2018.

The parties agreed that they are working towards the securing of the long-term future of the gas industry in Trinidad and Tobago. 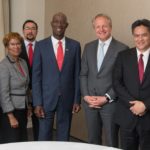