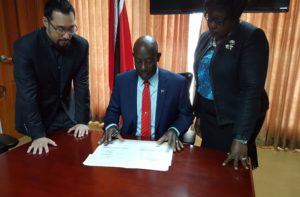 The Prime Minister today (Monday 8th January, 2018) along with other members of the Government, signed the necessary paperwork to nominate Madame Justice Paula Mae Weekes for the position of President of the Republic of Trinidad and Tobago.

The Government was joined by the Leader of the Opposition, Kamla Persad-Bissessar and other Opposition members who supported the nomination and also signed the nomination papers at the Office of the Prime Minister, St Clair, Port of Spain, this morning.  The candidate therefore, Justice Paula Mae Weekes, is the sole nominee for the role of President of the Republic of Trinidad and Tobago.

The Constitution provides for an Electoral College consisting of all the Members of the Senate and the House of Representatives assembled together and convened and presided over by the Speaker of the House to elect a President by secret ballot. Ten Senators, the Speaker and twelve other Members of the House of Representatives constitute a quorum of the Electoral College.

The Electoral College will meet on Friday 19th January, 2018 to elect a new President. 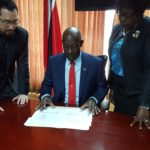