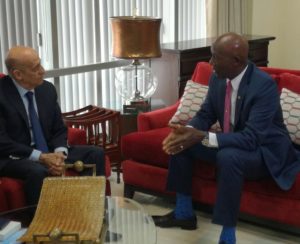 Julio Maglione, President of the international federation for aquatic sports (Federation Internationale de Natation), FINA applauded the high standard of the country’s aquatic facilities and pledged his support for the continued development of water sports locally. Mr. Maglione made the commitment during a meeting with Prime Minister, Dr the Honourable Keith Rowley today, 28th June, 2017.

At the meeting, Prime Minister Rowley thanked FINA for choosing Trinidad and Tobago as host of the ongoing Central American and Caribbean Amateur Swimming Confederation (CCCAN) Championships which ends on 2nd July.  All events, with the exception of Open Water Swimming, are being held at the Aquatic Centre in Couva which was designed to meet FINA’s requirements for international events.

During their discussions the Prime Minster said, “We are learning a lot from this experience and we hope that you will consider us for other tournaments and training opportunities. We want to expose our young people to as many international events as we can.”

He added, “We are proud of our Olympic medals in swimming and we are proud of George Bovell. We want to see an increase in the number of people training in diving and synchronised swimming.”

Mr Maglione promised that his federation will provide technical assistance and scholarship opportunities to promote the expansion of aquatic sports. One of these support initiatives will see FINA hosting two swimming lectures in Trinidad and Tobago with the aim of expanding participation in the sport.

FINA is committed to continue working with the Minister of Sport and Youth Affairs, the Honourable Darryl Smith, who was also at the meeting, to facilitate these developments.

The Prime Minister assured that increasing access to aquatic facilities remained a priority and that his Government was in the process of finalising plans for the construction of two community swimming pools. 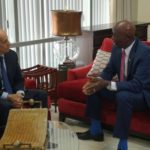