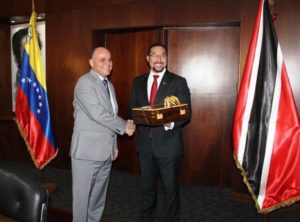 Minister Stuart Young, M.P., Minister in the Office of the Prime Minister, Minister in the Ministry of the Attorney General and Legal Affairs and Minister of Communications led a Trinidad and Tobago delegation comprising the President of National Gas Company of Trinidad and Tobago Limited (NGC), Mark Loquan, former PS Selwyn Lashley and other members of NGC to Caracas, Venezuela today (27.06.18) to continue negotiations with respect to the Venezuelan Dragon across border gas field.

The parties spent hours negotiating today in Caracas bringing the possibility of the across border gas deal closer. There remains a number of areas where further work is required and Minister Young agreed to return to Caracas, Venezuela in two weeks for the two Ministers to attempt to settle the terms of the agreement.

Minister Young extended an invitation for Minister Quevedo to come to Trinidad to visit the LNG and other downstream petchem operations.

All parties involved remain committed to the Dragon Gas Project becoming a reality. 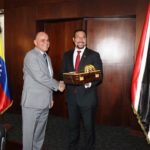