Prime Minister Dr the Hon. Keith Rowley joined regional leaders in Barbados today (Tuesday 18 February, 2020) for the 31st Inter-sessional Meeting of the Conference of Heads of Government of the Caribbean Community (CARICOM).

The Hon. François-Philippe Champagne, Canada’s Foreign Affairs Minister addressed heads at the meeting and indicated that his country is taking steps to strengthen its relationship with CARICOM. To this end, Canada has proposed an annual meeting with the regional body.

Prime Minister Rowley, in his response to Minister Champagne, asked Canada to consider lifting its visa requirements for Trinidad and Tobago and by extension the region.

Dr Rowley said both sides would be well-served by the removal of this barrier given Trinidad and Tobago’s deep and historical connections with Canada.

He pledged that two officers from the Ministry of Foreign and CARICOM Affairs will be sent to the unit on secondment to bolster and expedite the regional integration initiative.

She said, “When we left Castries in July last year, we had no clue that we would be facing a potential pandemic in the world with COVID-19. We didn’t have any idea that our ability to function as a single domestic space would be threatened by that development.”
She noted that it is the Implementation Agency for Crime and Security that is able to track the movement of people and alert border security officials regarding risks associated with individuals entering the region.

The Barbados Prime Minister said it was this regional institution that was able to provide front-line protection for member states.

Outgoing CARICOM Chairman, the Hon. Allen Chastanet, Prime Minister of St Lucia said the response to the disease is a great example of the region working together.

Chastanet said, “A great example of our regionalism working is in our approach to the spread of the Coronavirus. As many of you are aware a week ago Saint Lucia was on high alert and thankfully the RSS (Regional Security System) stepped in to help get our samples to CARPHA for immediate testing and they quickly came back to us with news that we were Coronavirus free.”

He added, “We are so thankful as a nation to the RSS and CARPHA for going above and beyond. This reminds us of the importance of being part of a union; being part of a group that in times of emergency have your back. This is what being part of CARICOM is about.”
At tomorrow’s meeting the need for ongoing advocacy against the challenges of blacklisting, de-risking, and withdrawal of Correspondent Banking Services is on the agenda.

The Heads are also expected to discuss a proposed CARICOM African Summit among a number of Foreign and Community relations matters. 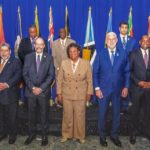