MESSAGE TO THE NATION BY DR THE HO 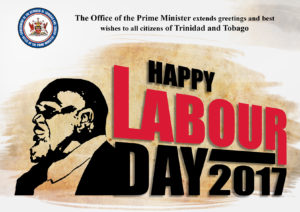 NOURABLE KEITH ROWLEY, MP PRIME MINISTER OF THE REPUBLIC OF TRINIDAD & TOBAGO ON THE OCCASION OF LABOUR DAY 2017

Fellow citizens, on behalf of the Government of Trinidad and Tobago, I join you today to recognise and honour all the workers of our nation, past and present, who have contributed to the successes and prosperity we have enjoyed over the course of our history.

Forty-four years after first being declared as an annual national holiday in 1973, June 19, Labour Day, still remains a powerful reminder of the struggles endured by the workers of the 1930s.

It was on that day in 1937, attempts were made to arrest labour leader and the people’s champion, Tubal Uriah ‘Buzz” Butler, during the historic labour riots that would herald lasting changes in the labour movement in Trinidad and Tobago.

It is unfortunate that the fight for workers’ rights resulted in the loss of life, but those riots not only changed the pervading views at the time regarding workers; but also ushered in the trade union movement and later drove the push for self-rule and independence.

Today the names Tubal Uriah “Buzz” Butler, Adrian Cola Rienzi, Arthur Andrew Cipriani and George Weekes retain a potency in the history of Trinidad and Tobago. These heroic leaders championed the cause of workers’ rights, calling for fair and decent wages for the working class, while fighting against injustice.

From an initial ten trade unions in Trinidad by the end of 1938, more than in any other West Indian colony at the time, Trinidad and Tobago now boasts over 40 trade unions representing all classes and categories of blue and white collar workers.

This Government remains committed to creating an environment in Trinidad and Tobago which supports positive labour relations, as we understand the pivotal role of labour within the context of sustainable development and competitiveness in the global market.

We have consistently encouraged open dialogue with the unions and we respect and facilitate the collective bargaining process.

All of us in Trinidad and Tobago want to see this country proceed along the path to prosperity and overcome the challenges we currently face. Over the past few months we have witnessed some positive developments – our talks with energy sector leaders and partners both here and abroad are beginning to bear fruit.

Government continues to actualize its plan of diversification into those areas where we can be competitive, such as the creative industries, tourism, maritime related services and ICT enabled services.

But to fully achieve these goals we must be cognizant of the fact that we have to work together as a people. We have to heighten our dedication and become more innovative and productive. We have to respect one another across the bargaining table with a view to attaining win-win scenarios that work in the best interest of workers, employers and ultimately our country.

As we recognize the invaluable contribution of workers during this Labour Day commemoration, let us also re-commit to further strengthening our social dialogue processes to afford each and every citizen of this country the opportunity for better living and working conditions.

We invite all workers, unions and employers to join us in working together to achieve a more competitive, productive and efficient economy, which in the end will benefit us all.

Do have a safe and enjoyable Labour Day. 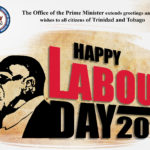