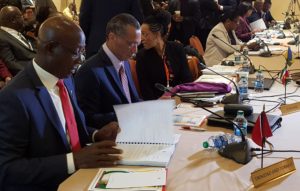 Prime Minister Dr the Honourable Keith Rowley joined regional leaders today (Tuesday 26 February, 2019) in St Kitts and Nevis for the 30th Inter-sessional Meeting of the Conference of Heads of Government of the Caribbean Community (CARICOM) which runs from 26-27 February, 2019.

In delivering remarks at the opening session of the two-day meeting, CARICOM Chairman, the Hon. Timothy Harris, Prime Minister of St Kitts and Nevis said the region must use unity as a weapon and a shield.

Prime Minister Harris said, “As small States, it is our duty to stand together and advocate for adherence to the principles espoused and codified in the international multilateral organisations and institutions. It is our only hope to stymie those who would conduct global affairs on the basis of might being right.”

“Our Community could be justifiably proud of our stance and our efforts to help the people of Venezuela resolve their crisis. I have no doubt in my mind that the principled position taken by CARICOM, working with like-minded countries, has prevented, so far, a catastrophe on our borders. We will continue to urge that dialogue is the only way to achieve a lasting solution.”

The Conference Chair also commented on the current turbulence in Haiti.

Prime Minister Harris said, “We equally wish for a peaceful resolution of the issues in Haiti. Haiti has played a pivotal role in our history from slavery to Emancipation and we wish that Haiti should take on a pre-eminent role in our region.”

Ambassador Irwin LaRocque, CARICOM’s Secretary-General, addressed this issue, “The situation in our Member State, Haiti, is also a cause for concern. The deaths and violent confrontations that have marred protest action are highly regrettable.”

“The Community reiterates its call for calm and a cessation of the violence, and appeals to all involved to engage in constructive dialogue, to respect the Constitution, the rule of law and democratic processes so that issues can be resolved in a peaceful atmosphere and allow for the return to a state of normalcy. CARICOM stands ready to assist in any way possible to end the disturbances which are destabilising the country.”

The Secretary General again spoke about the impact of the European Union labelling member states as non-cooperative tax jurisdictions that refuse to comply with what the EU determines to be good governance standards.

Mr LaRoque said, “Their requirements for compliance are encroaching on our sovereignty and reek of a by-gone era which came to an end with our political independence. The onerous requirements being imposed are constantly shifting and go beyond those established by the Organisation for Economic Co-operation and Development (OECD).”

During the plenary session the President of Estonia, Her Excellency Kersti Kaljulaid addressed the conference and shared her country’s rise as a digital economy and its ascendency as the digital leader in Europe. President Kaljulaid encouraged CARICOM to continue its move towards the development of a single ICT space.