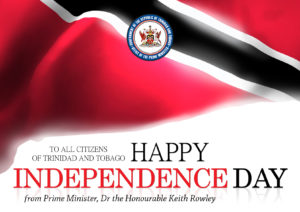 I believe, with sincere honesty, that we should be celebrating the 57th anniversary of our Independence today, looking deeply into our individual consciences to consider the highs and lows in our recent, national experience.

The completion of Carifesta 2019 was one such high. We saw thousands of our citizens blending together with other Caribbean peoples in a festival to celebrate the great spirit, which continues to evolve into a distinctive Caribbean culture.

We demonstrated, that in spite of the history of how we all arrived here, and our language and ethnic differences, there is a unique richness of spirit which resides, within all Caribbean people.

That “Caribbeaness” was further demonstrated, last weekend when this country and Barbados signed a Memorandum of Understanding from which joint initiatives will be developed for the exploitation of hydro-carbon resources across our maritime boundaries.

This geographical area, appears to hold gas-reserve potential, which could be exploited to supply our Point Lisas Industrial Estate, at the same time, granting Barbados a guaranteed market for supplies developed in its exclusive economic zone.

Your government also proposes to discuss further cooperation with the Barbados government – initiatives in the areas of investment, transportation, fishing and the sharing of diplomatic missions across Africa and Asia.

The potential of a new, cooperative Caribbean framework is indeed laudable. I summarised it last weekend as being “All good for Barbados, and All good for Trinidad and Tobago.”

There is also the high of this country’s successes at the recently concluded Pan American Games in which our athletes came home with 12 medals, including two gold, and a praise-worthy standing among all performing countries.

But there were lows on the national landscape, however. One of which was the spreading of a disappointingly negative story line that this country was in a state of crisis. Some persons – rather “doomsters” look at our daily lives, never citing our great international achievements, the beauties of life in Trinidad and Tobago or the daily struggles against our inevitable national challenges. Instead, they choose to purvey only stories of unnecessary bitterness, manufactured social conflict, racial tension, even gleefully predicting our collective failure.

They pronounced, wrongly, that your government would never take serious action against white-collar crime, nor progressively pursue the spate of violent crimes — but observe that your government’s stand of proceeding with a series of legislative crime-fighting measures, and that it demonstrates a determined will to bring order where there is a chaotic reality — fixing the broken parts.

Admittedly, the inherent fault lines running through our body politic are manifested every day in the anger and violence among individuals, families and communities. It brings no comfort to remind that crime is now a universal disease, being spread by the culture of drugs, guns and gangs.

This disease was identified years ago, and attempts were made to isolate Trinidad and Tobago, as much as possible, but sadly, in recent times, our borders were left vulnerable, the results of that culture are what we see reported every day.

I wish to repeat that the government, which I lead, continues to embrace the great Vision outlined by this country’s Founding Father, Dr Eric Eustace Williams, at our independence, in 1962. We strive towards fixing and maintaining our institutions, the education of our people, the decolonisation of their minds, and improvements in the quality of life, overall.

For the vulnerable among us, we fight to maintain the provisions of over 100 grants and services, available through government ministries and agencies – many of these being far more supportive than those in developed societies.

The more fortunate, it should be easily recognised, continue to benefit — even in this period of declining government revenues — from free health care, education, various State subsidies and facilitations.

The watch words, within Dr Williams’s Vision of Discipline, Production and Tolerance are still so relevant and alive today, having the same significance of fifty-seven years ago, and are, no doubt, needed now, probably, more than ever. Independence, unless “it is a sham and an imposture”, Dr Williams wrote, means a clean slate, and the throwing off of the burdens of the past but we cannot sidestep the burdens of the present and hope to succeed.

The 21st century, as it unfolds, is demanding strategic knowledge from both a people and a nation. This then is not the time for citizens to play the blame-game or to dishonestly throw stones at each other.

In other parts of the world, progressive citizens, rather than pelt stones, are using stones to build paths to a New Society. Let’s all work to converting the lows of partisan political rivalries, just as they confront us, into the highs of harmony, mutual respect and a permanent space for moral values.

Let’s seek to bring out the best in ourselves, always.

Recently, I made some comments on the Public Service, which were eagerly misinterpreted, unfortunately. However, I hope that this could be the beginning a national conversation on the Public Service, and that we could work collectively towards demanding a business-orientated organisation, one that delivers customer-sensitive service, adopts a culture of strategic planning, delivers prompt results and cost effective projects.

Such an organisation has to be the spinal cord of the New Society – our re-focusing on higher moral values, and morality in public and private office; achieving a safer country, through authorities solving and citizens consciously preventing crime; the financial comfort of all, and citizens experiencing a progressively-improving quality of life; and a creative and innovative society.

As citizens, we must always be minded that 21st century trends demand that we fix those unproductive aspects in our lives, and that we all innovate, create and seek to discover.

Trends in this Century are demanding an evolutionary shift from the culture of dependency and entitlement to a new role for the citizen, that of individual responsibility i.e. people taking charge of their lives, rather than waiting on others or the state for relief. We must acknowledge and demand that there are important roles for the state in all our lives but we will only get the best of ourselves and our society when we also acknowledge the very important role of individual responsibility.

As we consciously review the list of highs and lows, we should also be asking ourselves how can we re-create, change, solve, and invent. We must be aware that the Century is now demanding that citizens create their own New Society, in which they both own the change they want, and the future they think is possible. Let us hold hands and step confidently forward with “boundless faith” in a destiny which we can shape. 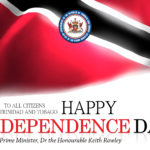