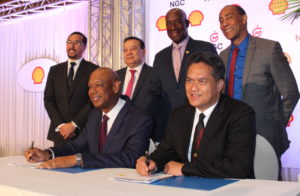 The National Gas Company will continue to play a vital role in the local energy industry ensuring that the people of Trinidad and Tobago receive an equitable return for the sale of the country’s resources. Prime Minister Dr the Hon. Keith Rowley gave the assurance today in response to recent calls for the removal or downsizing of the State-owned company’s function in the energy sector.
Dr Rowley was speaking at the Term Sheet Signing between the National Gas Company (NGC) and Shell at the Hyatt Regency when he made the comments today (24 June, 2019).
The Prime Minister said NGC is the realisation of the investment made by the people of Trinidad and Tobago in the local energy industry which is largely reflected in the pipeline infrastructure which allows the company to act as an aggregator, marketer, transporter and merchant of natural gas. He said the company was established to create returns for the people of Trinidad and Tobago and it remains a key economic partner, generating great value for the country.
NGC President Mark Loquan provided the context for the importance of today’s agreement as he underscored that it will make an important contribution to the energy sector of Trinidad and Tobago by securing gas from Shell’s portfolio and secure the NGC’s position for downstream negotiations.
Professor Gerry Brooks, outgoing Chairman of the NGC Group of Companies noted that the companies contributed to approximately TTD2.2 billion in taxes and dividends in 2018. Professor Brooks called today’s term sheet signing a critical milestone for NGC and the country as it sets the foundation for fulfilling our gas supply obligations. 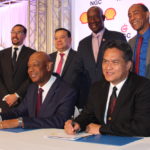